return to I Love My Journal
Stop and Look Around
...or life will pass you by...
Tags
CHILDREN 4
LIFE 3
FAMILY 3
FUN 2
PARENTING 1
HALLOWEEN 1
KIDS 1

Subscribe!
no mood
>>next>>
<<previous<<
Adventures in Playland
I should of wrote about experience two months ago, but I just kept putting it off.  So, I though I should tell this story before my memory fails me anymore than it already has and I can't remember all the details. Well, this happened on the way home from California on March 28th, 2009.

I was driving home with my sister Chloe, her daughter Jovie, myself, Cecilia, Collin and Sam.  Well, we stopped in Winnemuca for dinner at McDonald that had a little play area.  As you can imagine it was pretty crazy with Chloe and me and 4 kids.

I took Sam and Cecilia with me to the bathroom to change Sam's diaper and get Cecilia changed in her PJs and stuff.  When we were walking back to the play area I could see everyone in the restaurant looking up at the play area and I knew something was wrong.  That motherly instinct took over and I knew that something was going on with Collin.  Then I heard him cry and my suspisions were confirmed.

I ran in to see Collin on the outside of the playarea (where kids are not supposed to be able to get to) clinging on the side for dear life.  At the moment that I saw him Chloe was trying to coax him down with another lady.  He was freaking out and crying and just saying "I want my mommy!"  I gave Sam to Chloe and climbed up to Collin as fast as I could.  He came to me immideately, but there was one little problem.  I couldn't climb down and hold him at the same time.  The lady that was trying to help Collin come down tried to take him from me, but Collin started kicking and screaming and did not want to go to her, so we thought that maybe he would go to Chloe easier since he knows her, so she gave Sam to another nice lady who was there and I handed Collin down to her.

He still kicked and screamed, but I just handed him down anyway and then procceded to climb down as quick as I couid and then took him directly back to my arms.  He held me tight and cryed on my shoulder.  It was kind of sad, but cute.  During all of this everyone in the restaurant is looking and one man is saying that he doesn't think that Collin could get on the outside of the playland if there was not some kind of malfunction with the play land thing.  So all the workers are in there trying to see if there was a problem with ladders and everything.

I still don't know how he got up there, it remains a mystery, but it was deffinitely an adventure, one we will not soon forget.  Hopefully an experience Collin will never forget, I would not like to relive that adventure.  After I got Collin down and he cried a little bit, I took him to the bathroom to change his bum because he was stinky  when I got him down.  When I was changing his diaper he started crying and said "mom I was so scared" and then he stopped.  And then he would cry again and said "mom I was up there with my stinky bum."  Again, it was so sad, but cute.

We are actually driving to California next week and will probably be stopping at that same McDonald's again, so I will take some pictures of the playland thing, so you can get a visiual idea of Collin's playland climbing. 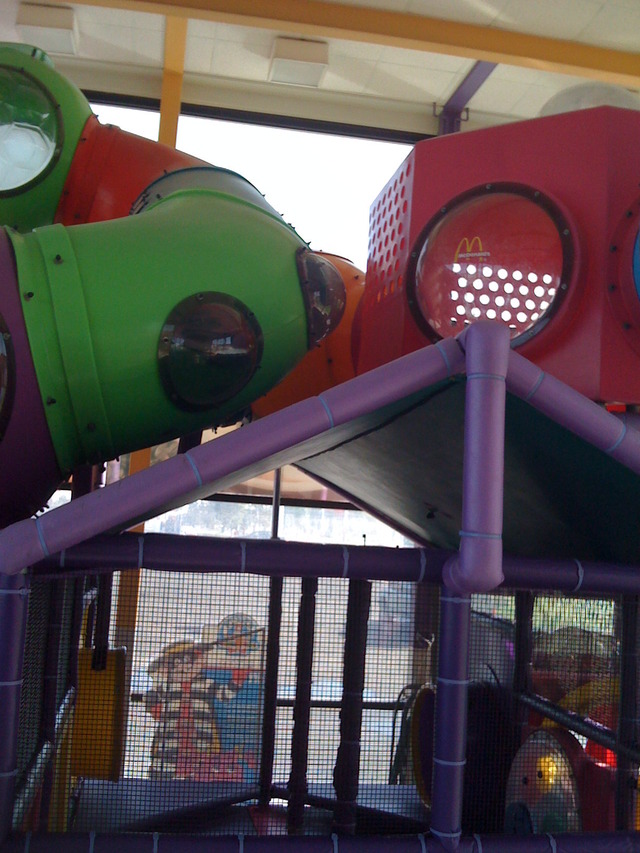 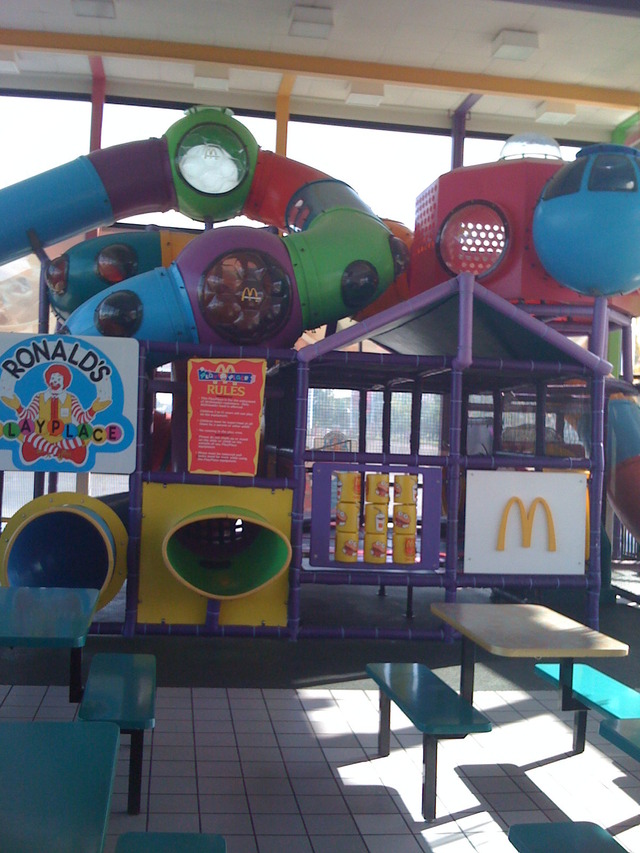