Subscribe!
happy
>>next>>
<<previous<<
Who Uses Linux?
I was reading this article a few minutes ago, and a conversation I had with a potential employer popped into my head.

It was an interview for a Microsoft ASP programmer I responded to about 3 years ago.  They wanted a senior web engineer, and I responded with my PHP credentials, and for some reason, that led to an interview.

The interview was short, and highly condescending.  I still don't understand why he wanted to talk to me at all.  What he basically told me was this:

"Linux is good for hobbyists and people just beginning to understand technology.  Microsoft is suited much more for the world of enterprise and corporations."

Basically, my response was short, but polite, and I went on my way.

The article I mentioned at the beginning of this entry was a breath of fresh air and reaffirmed my belief that Linux is much, much, much more than a hobbyist operating system.

Although the article I mentioned above is heavily biased the other direction, it made me ask the question, "What would happen to the cyber world if Linux were to magically disappear?"

According to the article, I would be surprised if the Internet itself continued to operate, if Linux was gone.  Google would definitely be off-line, along with most major technology companies (except Microsoft, of course).  The telephone system would collapse, a whole lot of TVs would stop working, and a bunch of other stuff.

I don't know how much of that is true, but it was sure nice to read.

One point of that article I didn't get, however, is the statistic that approximately 8% of all web traffic is used by Linux computers!?

I'm sorry, but I run 2 websites which are not technology based at all, and both get enough traffic to get an accurate sample.  One gets 200,000 pageviews per month, and the other gets around 6000.  Below are the statistics for both (screenshots of awstats)

Here's the one with the higher traffic:

That states that Linux is getting a whopping 0.6% of Internet traffic.  As much as I love Linux, I'm not going to drink the cool-aid just yet.  Numbers are good enough for me.  (I love the fact that Firefox keeps growing, though.  Almost 20%  BUYAH!!!)

Here's the next non-technical site:

Yup, a whopping 0.3% attributed to Linux.  Keep in mind - these sites have *NOTHING* to do with technology, and their demographic is 20-40 year olds - split right down the middle of males and females.  So, this is just about as accurate as it's gonna get.

Here's one more for this site (www.ilovemyjournal.com).  It's *highly* biased toward Linux: 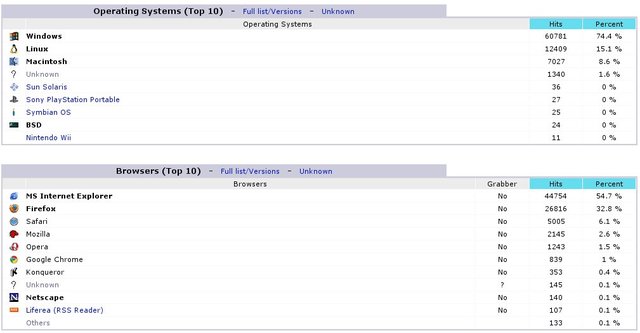 Anyway...  Just some rambling thoughts about Linux which I hope someone other than me might find interesting.

Anyone else have stats on Linux usage for their sites? The higher the hit-count, the better.
Linux / Microsoft
Comment by shamil on Feb. 19, 2009 @ 08:41 pm
Cool, some actual demographics for how many people use linux. And not just market share. Market share doesn't say anything about linux except for  maybe redhat or someone big like that.

Linux usually doesn't require registration. So, it's very difficult to find out who's using it.
Comment by Roy Shchestowitz on Feb. 20, 2009 @ 10:22 am
On my site (boycottnovell) which does about 1 million pageviews a month, over 30% use GNU/Linux (based on AWStats).

Don't measure usage based on the 'average' users' site and assume this to be rrpesentative of the average. It's a terminal mistake to make.

Geographies matter A LOT too.  Linux usage in Brazil and Russian, for example, is massive. It tends to land on sites that don't speak English.
Comment by Bill Wilson on Jul. 14, 2009 @ 12:16 am
We use and recommend Linux due to its stability and scalability. Most of our customers use Linux for the mission critical applications on the server.

Most use MS Windows at the desktop but an increasing number have opted for Open Office and since the financial problems many are now moving to Ubuntu on the desktop.

I personally use a dual boot machine but only boot MS on odd occasions; Photoshop TomTom downloads and such apps.

I find the productivity and reliability using Compiz and Ubuntu along with a good look and feel gives me 99% of my requirements.

Comment by Beth Lynn Eicher on Jun. 26, 2010 @ 07:05 am
Actually I have a website dedicated to the subject of desktop operating system and browser market share at whatwillweuse.com

At What Will We Use, have shown that Internet Explorer lacks majority market share. We look at our on visitor stats and we participate on http://www.w3counter.com which watches market share stats on +30K sites around the world and reports their stats here.

I urge everyone to join the part at whatwillweuse and w3counter.

Comment by David Parsons on Jul. 03, 2010 @ 04:17 am
I am aretired Baptist minister returning to his technical roots and running my own PC business.

It's of interest to me to research this further because I am on the management committee of a local charity and one planned fund raising event will be a seminar I shall be conducting on the rise and use of Linux. I could potentially be addressing a large number of people who have never heard of open source and linux.

From both running my own business and also gleaning information from a son who also runs his own IT business we have an interesting 'take' on the use of Linux.

Many people are buying netbooks, laptops and PCs with Vista and Windows 7 pre-installed and are not making restore DVDs or flash drives for netbooks. When systems have crashed without restore software a number of our customers have been either content or in many cases absolutely delighted when we have installed Linux as a replacement (we tend to offer Ubuntu or Mint in the main).

I would imagine the seminar will be an eye opener to some because one of the reasons for the success of Microsoft is the use of aggressive publicity whereas Linux isn't really marketed either as aggressively or as a central policy.
Comment by Tim J. on Jan. 20, 2011 @ 10:14 pm
Ive been using Ubuntu Linux for about a year and really love it.Its fast dependable secure and theres a Ton of free software available for anything you want to do.When I used windows I spent all my time disinfecting scanning defragging and all that!Ubuntu is just as fast as the day I installed it a year ago and runs great I can do everything I need to do with it.I would highly recommend it for anyone tired of the windows insecuritys.Another good beginners distro is Linux Mint thinking of switching to that as Im running 9.10.Anyways its been a great ride so far with Linux!
Comment by anonymous on Jun. 20, 2012 @ 01:29 pm
vvvvvv daz wut i fink