Subscribe!
happy
>>next>>
<<previous<<
Energy Drinks...
About a year ago, I wrote about some feelings I have toward caffeine.  Since then, my feelings haven't changed much.

I try to limit the amount of caffeine consumption in which I partake.  You know, the whole "moderation in all things" crud...

Well...  Through this year, I've tried quite a few different caffeinated beverages, and I've found that Mountain Dew is a hard one to beat because it tastes pretty good, and it's free at work.  I like it mostly because it's free.  Yup.  Free is good.

Apart from the "free" variety, I'd have to say that Full Throttle is the beverage of choice lately, partly because it tastes good, and partly (mostly) because it's the cheapest at the nearest convenience store here.

Monster also had a good long run at number one as well for a while there, too.

A good friend of mine told me about a new energy drink today called "Sport Energy" (catchy name, right?)  Yeah..  He also told me it tasted quite good, and to put even more emphasis on it, the company's motto is "Shocking Great Taste".  Man...  This better taste good. 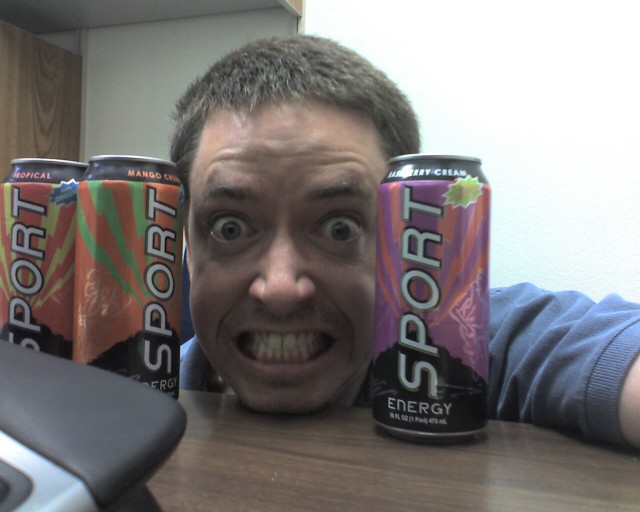 I cracked the "Raspberry Cream" one open and took a gulp.

The first thing I noticed was a lack of "taste overload".  This is a phenomenon coined by my wife when she first tasted a Monster energy drink.  She gasped and said something to the effect of, "Holy cow, that tastes too much!"  I'm not exactly sure how to communicate what she meant, mostly because I have no idea what she was talking about.  Heck, I love Monster....  But... anyway... yeah...  back to what I was saying....

No bitter aftertaste...  No smack-in-the-mouth overload...  Just a nice refreshing "beverage-esque" flavor with a refreshing amount of carbination, too.  Not as much as sprite or 7-up...  Just enough to keep things interesting.

I took my first drink about 15 minutes ago, and I can already feel the energy-portion of the drink hitting home.  So, that's good.

So, anyway...  I just thought I'd write about something... because I haven't written much lately.

Oh yeah...  If you like energy drinks and can access a Harmons anywhere, make a trip with your pick-up truck and get yourself a load.  They're on sale for $.80 a can.  Yup... 80 cents.

That's a good portion less than half of what other energy drinks cost.

I'm gonna go get me a truckload tomorrow.

And if the other flavors are as good as the raspberry cream, I might pick those up as well.
Miscellaneous
Comment by Koyote Dreams on Jul. 06, 2008 @ 07:40 pm
Hi!

I read your blog about energy drinks, my brother Manti found this drink by his favorite person Steven Seagal called "Lighting Bolt" there are two flavores one "Asain  Experience" and "Cherry Charge" They do not make you bounce of the wall and don't have a sudden crash. They give you bust but your not hyper and their only a buck.