Subscribe!
irritated
>>next>>
<<previous<<
Who Designed Rollover Ads?
Today I was given a link by a friend to go view, and since I trusted this friend, I immediately clicked it.  A good, interesting article came up, which I began to read.

I read for approximately 10 seconds and moved my mouse.  Upon moving my mouse, I accidentally rolled over the link circled in red. 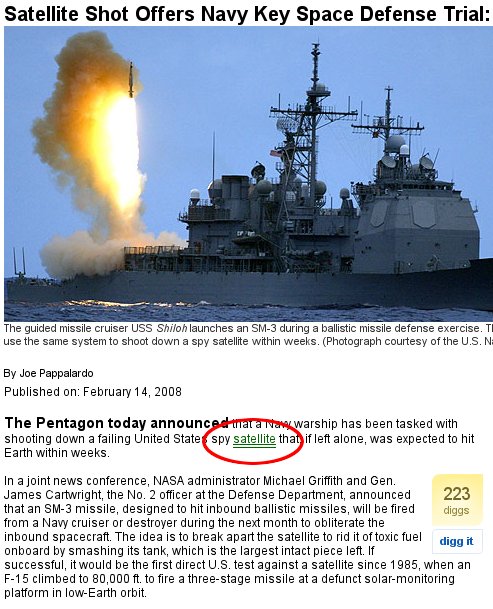 Well, after rolling over it, the usual advertisment popped up, which always seem to irritate the crud out of me.

They're big, intrusive, obtrustive, and usually totally and completely irrelevant to the underlined text's meaning. 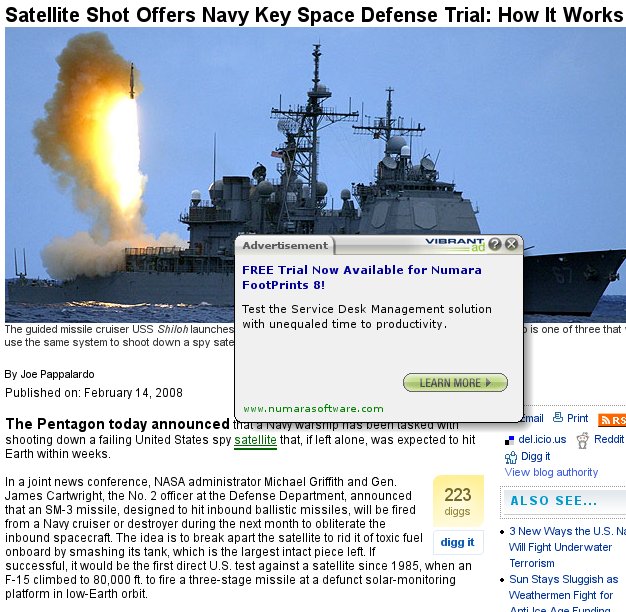 Now you tell me...  What in the world does that pop-up rollover ad have to do with the word "satellite"?  Maybe I'm the one who's naive.

Another gripe I have with these huge annoying "oops, I moved my mouse and now there's this huge mass of slime on my screen" ads is the following:

To activate the ad, you only need touch the linked text for a millisecond.  Go ahead... Try it.  Roll your mouse over one as fast as you possibly can, and *poof*, you get your nice slimy ad.  Now, how long does the ad last?  Oh yeah...  It lasts two freakin' seconds!  That's not too shabby of a ratio considering it only takes a millisecond to activate it.

Ya know... These wouldn't annoy me at all (or at least they would be tolerable) if they required more of a sticky roll-over to activate it.  If they made them so they would activate with a rollover of one second or greater, that would be acceptable.

As is, 100% of these stupid ads, at least for me, come up by mistakenly whizzing by the text and usually make it impossible to read the text I'm interested in, and thereby adds just that little bit more stress to my already stressed workday.

What a horrible thing to do to an otherwise acceptable website.

I'm done ranting now.
Computers / Miscellaneous
Comment by Orson Jones on Feb. 15, 2008 @ 11:18 am
And that is why I like NoScript
Comment by Dirk Gently on Feb. 15, 2008 @ 04:28 pm
Definitely ranting worthy.  The first time I saw one of these I was mildly annoyed, then after the third or forth time it just became irritating.  I find that I weave my way down the page like a maze, after that third or forth time I never returned.  I had seen one of these a year or so ago they've returned it seems.
Comment by Loni on Jun. 03, 2008 @ 02:34 am
I seem to recall you saying you used the adblock or adblock plus plugin for firefox...

if you'll add the following to your adblock preferences, all those lovely (!) text popups will be gone.


I generally build my own adblock 'block list' as I go.  tried the subscription options, but they allowed some sites explicitly which I did not like nor prefer being excluded.  So as I find annoyances, I add them to the block list.  Probably only have 30-40 entries in my list, but it cuts out 95% of the ads.