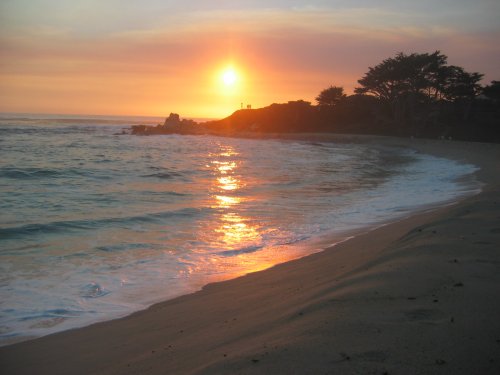 Okay...  I've got to start off here on a postive note, or I'll bring up all sorts of crappy emotions which I'd just rather not get into right now.  I'm sure they'll be brought up sooner or later, but for now, I'd like for you to just take a moment and sup in the absolute goodness found in the photograph on your right.

It really does amaze me how much better I feel about.... well... about everything while I'm at the beach at sunset.  Holy cow, I doubt life could get better than that, for me, right now.

I know I've said it before, but the salty crisp air, the cool breeze coming off the waves, the amazing, amazing, amazing sound the waves make as they crash on the shore, pretty much could make life worth living for me - if I had nothing else to live for.  It soothes me, almost like some sort of therapy.  It really was amazing to be there - maybe for the last time this year.  Hehe.... I took like.. 30 photos like that one tonight.  Good stuff. 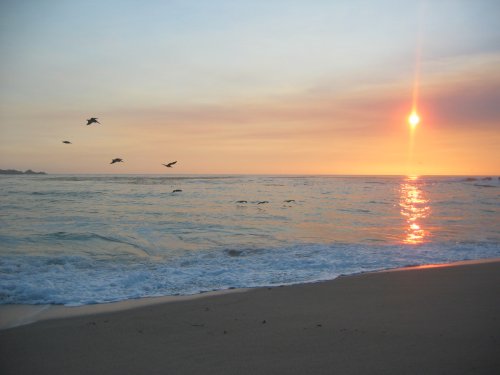 We were at the beach tonight to take the highly anticipated family photos, which pretty much nobody outside of my mother-in-law's immediate family wanted anything to do with.

Lemme just tell ya - because of the beach, and everything that goes along with it, the photo session was 1000% more bearable.  We had a photographer who really knew what he was doing, too.  Very cool, and very good with kids.  Yeah, that whole experience was much better than I thought it would be.  What a relief.

When we all arrived home after the photo session, it was around 8:30pm and some of us were hungry, some of us weren't, some of us wanted some type of food, and what-not, so...  I just told everyone that I wanted more chowder.  So, my wife and I took our kids to go get some.

During the ride there, we inevitably started talking about the whole mohawk ordeal, and Sarah gave me some new information which almost made my blood boil.  I'm not going to go into details, but it seems that my mother-in-law was so furious about my haircut that she commented to my wife on how disappointed she was in her for not making me comply with her wishes earlier.  That comment was bad enough, but - get this - this happened AFTER I CUT MY STINKIN' HAIR.  Holy cow.  ..... Holy cow.. 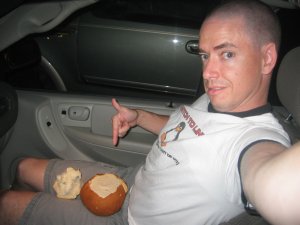 I was so perturbed about that, I couldn't go in to enjoy my meal at the hotel because you-know-who was in there.  So, I just stayed outside in the van.  Hehe... Here's some pictures of the chowder...  Mmmmmm - it was good....

I ate the whole thing, too.

All during today I didn't get so much as a "hi" from my mother-in-law all day, even after I shaved my head because of her - as I've previously explained.  Yup..  We did the pictures, we came home, and we ate - all without a single word from her. 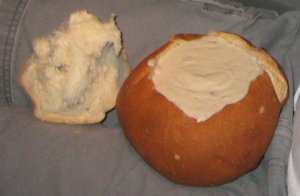 She did mumble "hi" when she walked by the van while I was enjoying my chowder, but that's it.  No "Thanks a ton for doing what you did, Jason." or anything so much as a look from her all day.  And then my wife comes at me with her "disappointing" my mother for not controlling me adequately - after I shaved my head!

I'm not sure if I should talk to her about this psychosis, or just let it go, or talk to her husband about it, or what.  Oh.. speaking of her husband, he just happened to thank me profusely immediately after I shaved my head, for which I am quite grateful.  Coming from him, at the time he gave it, I took his gratefulness to heart.  What a man.  Thanks, Henry.

Anyway... That's about the size of today.  Pretty crazy stuff, but man....

If you ever get to thinking you're insane, or crazy, or "not quite right in the head" or whatever.... 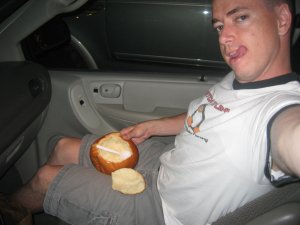 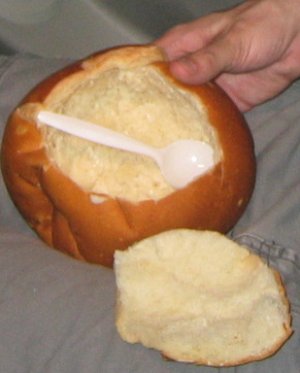