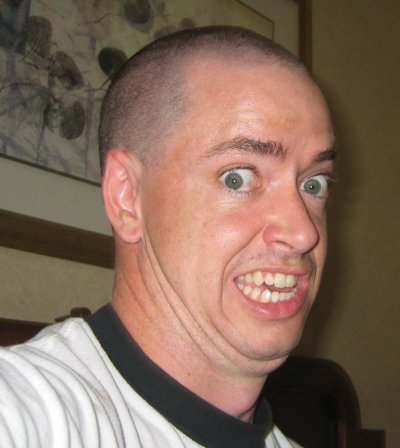 Okay...  It had to happen, and it happened today.  Since this is a public entry, and I really don't want to throw a negative light on the situation, I'll do my best to filter out my emotions.  If I have to vomit emotions, I'll do it in private.  Anyway...

This morning, I woke up and Kim (my dear mother-in-law) decided to make her distaste of my personal grooming habits (a.k.a. mohawk) apparent to everyone here.  I went and asked her about it and she said I was being selfish for not taking into consideration her feelings about everything.  Now... There are some things to take into consideration here:

Taking all that into account, it became apparent that there was going to be some pretty crazy stuff going on. Both me and my mother-in-law have pretty stubborn streaks, and when I feel I'm being treated unjustly, my fangs come out pretty readily. So.... Hmmm.... Yeah...

So.......... I ended up talking to her about the whole mohawk thing, and my actually enjoying it, and my wife enjoying it, etc... and she said the whole "You're just being selfish" bit, and to avoid world war 3, I told her I'd do it.

During the whole incident, there were so many things at play, and so many emotions going on in me, it was gonna be difficult to "choose the right" as they say.

After I shaved my head and was taking a shower, I was wrestling these emotions with quite a fervor, when the following words of my wife came into my head, "Sometimes we just need to be peacemakers." .....  I pondered that for a couple of seconds, and then the following scripture came into my head which states, "... and the peacemakers shall be called the children of God."  A bit of research brought on this scripture as well, and the more I thought about it...  The more a peace settled over me.

This wasn't the end, though.  I was seriously wrestling with all sorts of past bad feelings and misunderstanding, and all sorts of other things.  However, with that scripture in mind, and a resolution to make the best out of this bad situation, I got out of the shower and met the world with my baldness and all.

One thing I have in mind, however, which just disturbs the snot out of me is that I'm 99% sure that she would not have done the same thing on my birthday should I have requested it of her.  Hair style is nothing more than personal preference.  My preference was a mohawk.  That should not matter at all to her but....

We'll be going to take the wonderful pictures here soon... so...  we'll see how that goes.

This reminds me why pro photographers are a good thing. Anyone can take a picture, but it takes talent to make a picture.
Comment by gabriella yo mama on Mar. 12, 2009 @ 01:41 pm
hey you ;)

there seems to be something wrong with my cellphone...


IT DONT GOT YO NUMBA IN IT :D