Subscribe!
happy
>>next>>
<<previous<<
Good times with Shallow Sky
So, this weekend I had the pleasure of meeting yet another one of Utah's finest bands.  The band's name is "Shallow Sky", and if their music is any indicator, these guys are gonna stick around.

To be honest, I expected the 3 sessions (totalling 26-hours) with these guys to be a bit rough, due to only my incredible lack of sleep last week.  Being extremely tired makes anything rough.

So, the guys show up, and I immediately know I'm in for a good time.  These guys are fun, and easy to get along with.

...Then we started tracking guitars, and whatever worries I had about this session flew out the window.  Robert's sense of timing was impeccable, and his solos were face-melting.  Yes - my face is now melted.  The goodness flowing out of the amps was plentiful, and instead of worrying about sleep, I knew I was in for a good time, no matter what shape I was in.

Then Austin came in with a few solos of his own, as well as a killer off-beat rhythm on Exposure, which was simply brilliant.

Nate wasn't around much, but he came in, nailed the bass, and was good to go.  I hear he's good on stage, too.

Dan's turn was next to slap the skins, and his speed was seriously impressive.  Being a drummer myself, I was impressed to say the least.

Then there's Zac, the musical genius.  From singing backup harmonies and screaming, to playing intricate piano rolls - this dude has it all.

I've gotta say, the rubber meets the road with vocals, and I've gotta say, this is definitely where this band shines.  Tyler has spot-on pitch, and injects all of himself into his lyrics and vocals.  I was super impressed.  Have a listen to any of their music, and you'll know what I mean.  (Rob's vocals on No More Names was no less impressive, either.  Awesome vocals and mad guitar skills to boot!)

So, yeah...  I'm super glad these guys made it in to the studio, even if I was dead tired to begin with.  In the end, their music was amazing (I'm sure to be listening to it for weeks), and I was able to meet some of Utah's finest musicians. 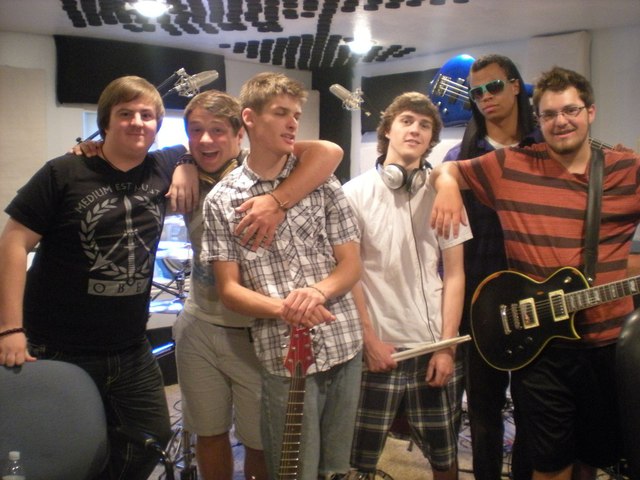