Subscribe!
caffeinated
>>next>>
<<previous<<
ILMJ Photo System?
So lately I haven't had any major projects going on involving programming, and I started to miss it, so I decided to act upon a thought I had about a month ago.

That thought consisted of me wanting a definitive answer to my almost 10,000-photo collection of digital images which seems to keep growing, and staying totally unorganized.

So, two days ago, I started in on the project, and at this point, I think it's feasible that this might just work.

I was sick of using files and folders to organize them, because then each image was limited to just one way of categorization.  So, what if I took a picture of my daugther holding a cat while on a trip to California's Disneyland?  Do I just slap it into the "Disneyland 2009" folder and be done with it?  What if it was an uber-cute kitty, and I wanted to remember it?  Bah...

I tried the gallery open source solution, and found that it did good for almost everything, but man - it was bloated, and it filled up my hard-drive twice due to php-strict errors.  Yeah, that wouldn't do.

It's going to be a bugger to polish, but the rough draft I have now is pretty darned exciting.

It allows for a sibling-only based tagging system, which allows you to tag your photo with as many tags as you like, and when it all boils down, your tags become albums.  So, with the aforementioned photo dilemma of the cute kitty at Disneyland, I could easily tag that sucker to be in my "daughter", "cats", "vacations", "Disneyland 2009", "California", and "Theme Parks" albums and have the photo be in all the albums it needs to be without duplicating the image.

Also, the way it's built - hopefully, the images will be very easily found and browsed with everything within a click's distance.

It will also be nice to have an application do nothing more than exactly what I need it to do.

Hopefully, I'll release it to all the ILMJ users soon.

Here are some screenshots of the rough version: 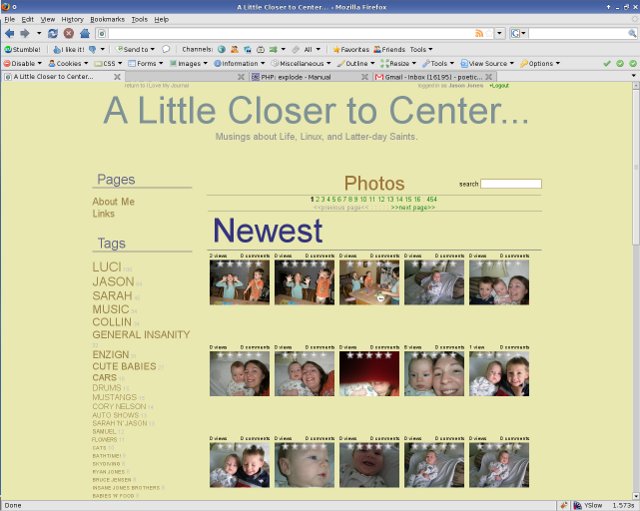 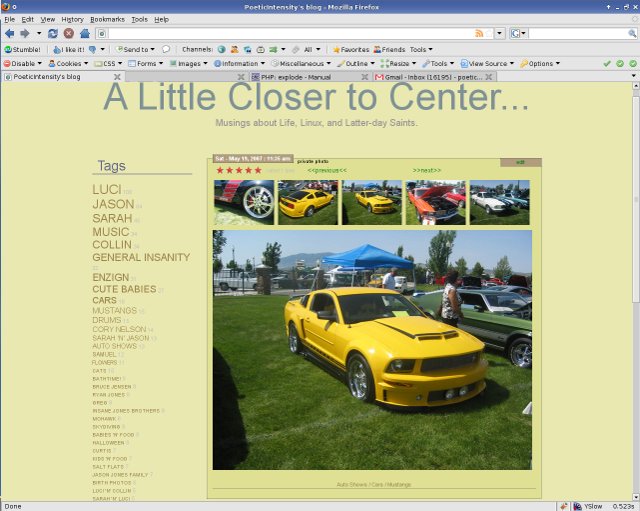 I Love My Journal