Subscribe!
content
>>next>>
<<previous<<
I Wish I Had a Camera
Last night, the temperature dropped down to right around 0 degrees fahrenheit.  When I woke up and was almost to work, I almost hit the car in front of me.  No, I'm not a poor driver...

It's just that with it being so cold, there was literally about a half an inch of frost which had gathered on.... pretty much anything left outside.

Where I work, there is a pond next-door surrounded by huge pine trees and a couple of cedars.  There was a mist which floated about 5 feet off the pond and all the trees were completely crystalized.  The sun was shining, too, so...  Well...  Everything was gorgeous.

It was as if I was walking in a post-card for Utah's best winter scene.

I considered taking a shot of it with my phone, but due to the horrible quality it would produce, at best, that would completely destroy the serenity of the moment.

Anyway...  I know a picture is worth a thousand words, but I thought I'd try anyway.

It really was breathtaking.

*UPDATE* - This is a day later (01-20-2009), and the frost isn't anywhere near as thick as it was yesterday, but I brought my camera today and took a picture of it.  Imagine the green pines being totally covered in frost, as well as the trunks of the other big trees.  This really doesn't do it justice...  It was gorgeous. 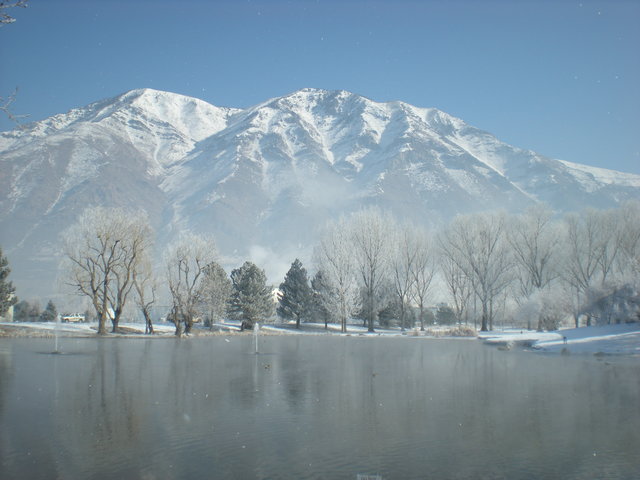