Subscribe!
excited
>>next>>
<<previous<<
07 Mustang GT VS 99 Firebird
I just got back from one of the best races I've been on.  It was awesome.

I've only got a bit to write about it, so I'll write as much as I can.

I took off around 10:20 tonight to see what kind of damage I could do out on the streets.

I was cruising on state street in Orem when I found a Dodge Charger R/T who wanted to play.  The problem with that is, I've been pulled over in Orem, and from various sources (and common sense) I know that if you put Saturday night with street racing on state street, you'll almost always get pulled over.  I didn't wanna take that chance, so, even though the circumstances were perfect, and we were both at a red light, I didn't even try.  *sigh*...  I would have loved too, but.... not worth it.  Too many cars around...

Anyway...  I was heading north into Pleasant Grove when I saw this jet-black Pontiac Firebird headin' south.  I couldn't pass him up, so I U-turned and took after him.

We met up in Orem and we played a little bit, and I could tell he was fast.  At the first opportunity, I rolled down my window and asked him if he wanted to come to Springville with me.  He said "sure!", and we were off.

We arrived at the usual make-shift drag strip just west of the freeway in Springville, only to find that it was totally snowed over.  There was an inch of ice covered by 3 inches of snow.  We weren't going anywhere there.

So...  I decided to drive on it anyway to see if there were any portions of the road which had been plowed.  He followed me.

I soon found that the further we went, the worse the snow was, so I turned around and headed back.  He did the same.

There was a slight problem, however....  He went a bit too far south to the side of the road, and ended up getting himself pretty stuck.

I wasn't about to have dragged him all the way to Springville, only to let him stay there stuck in the snow, so I got out and we spent about 15 minutes trying to get him out.

Eventually, after digging, dirting, and pushing, we managed to get him out.

Through all this, we introduced ourselves, and his name is Rex.  His firebird is the best lookin' firebird I've ever seen.  Jet-black and gorgeous.

Anyway... We ended up going on the dirty frontage road by the freeway, and we raced three times.

Take Three: We turn around and start from 30 MPH.  I beep three times, and in the midst of it all, I hit my rev limiter and that was pretty much it.  We continued to 90MPH and he takes me hands down.

After all was said and done, Rex was a pretty cool guy.  I got his number and hope to race again in the springtime, when the roads aren't so darned dirty.

Anyway... I recorded the whole thing with my iaudio X5 media player / recorder, and I think it turned out really well.  When we take off, you sure can hear his engine roar, and unfortunately, it documents pretty well how fast he got ahead of me. 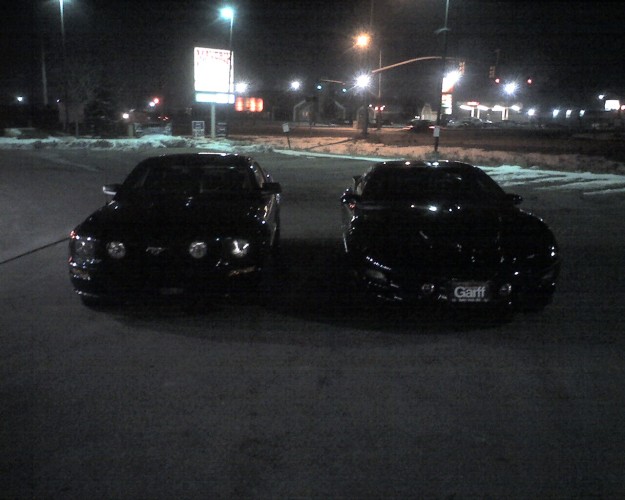 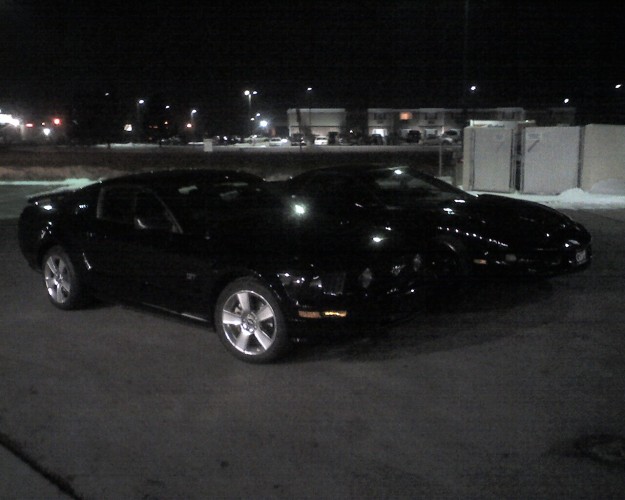 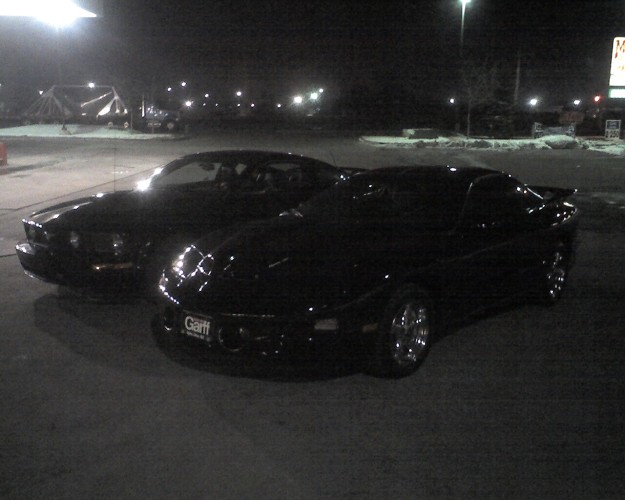 No I'm kidding.  It's fast.  Rex is my friend and I race with him all the time.  The birds faster than my junky street bike, and thats a moderate accomplishment.

Watch out cause he's workin on making it slower, maybe you should race him again in a month or so.