Subscribe!
happy
>>next>>
<<previous<<
The Best Jones Halloween Yet!
What do you get when you mix a couple of black lights, a fog machine, a strobe light, a dark hallway, and a couple of demented minds with Halloween?  I'll tell ya what you get:

With the debut happening just last year, there hasn't been a whole lot of time for refinement, but all things considered, I'd have to say this year was simply fantastic.  I didn't think it could get better than last year, but I was definitely wrong.

All I gotta say is "Holy cow, that was awesome!"

When I arrived at the scene, I could tell Ryan had done his due dilligence.  The whole porch was blacked-out complete with all the ammenities needed to give some people reason to not want to go anywhere near his house. 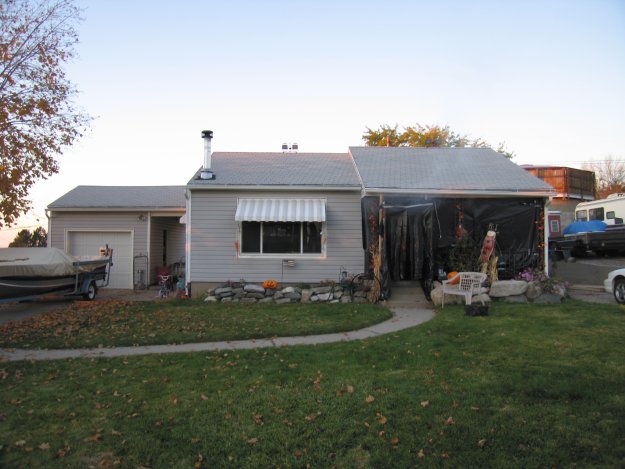 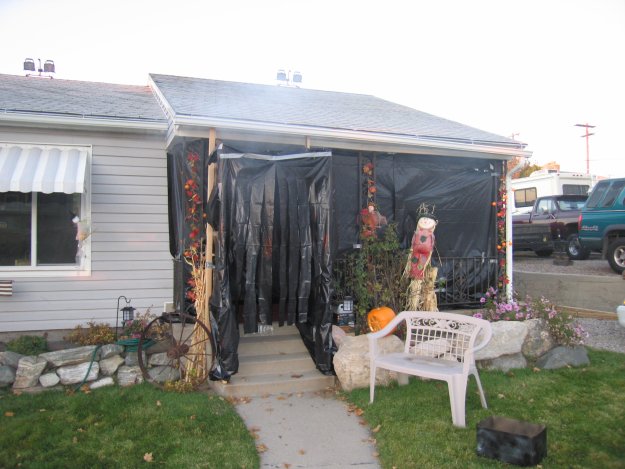 When dark settled in, the first obvious thing seen was the 4 halogen lights on his roof making the immediate environment seem like noon-day. 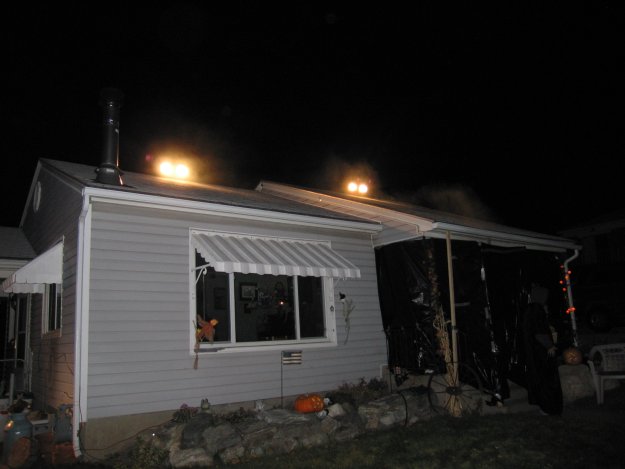 This was used to decrease the night-vision in the victims.  It worked wonderfully.

After being blinded, you see strips of black plastic semi-covering a short walk-way which leads to a pretty freaky looking skull whose eye sockets intermittently glow red. 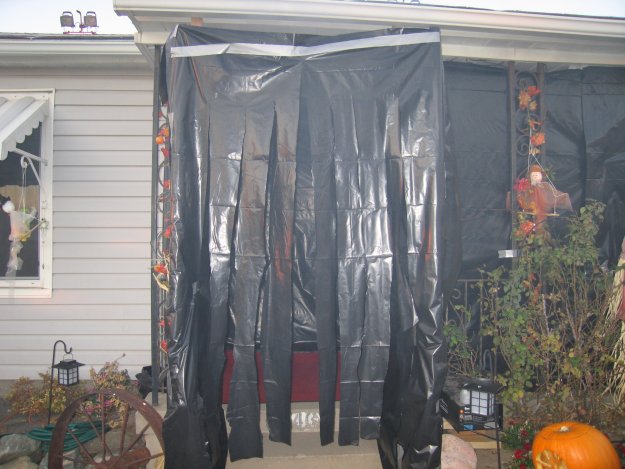 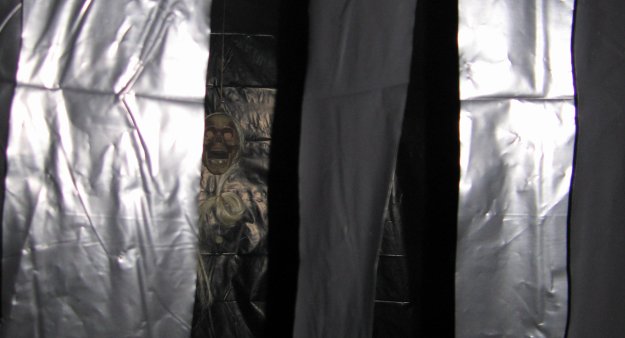 After that, you look to the right and see pretty much nothing but fog and a light shining on what seems to be a floating head.  The mask we used was well suited for the job.  It could have been a bit better, but all in all, it still served to scare quite well. 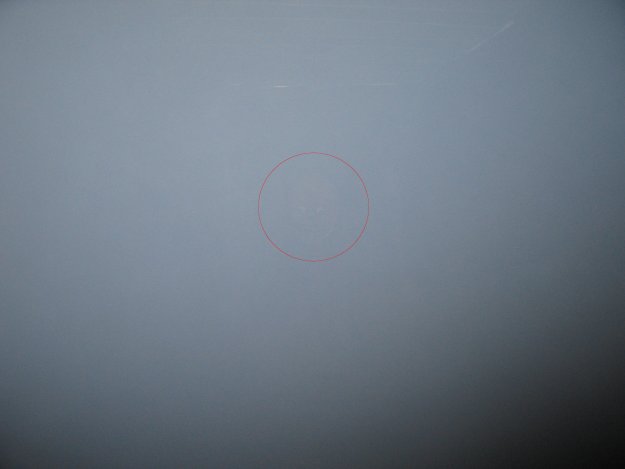 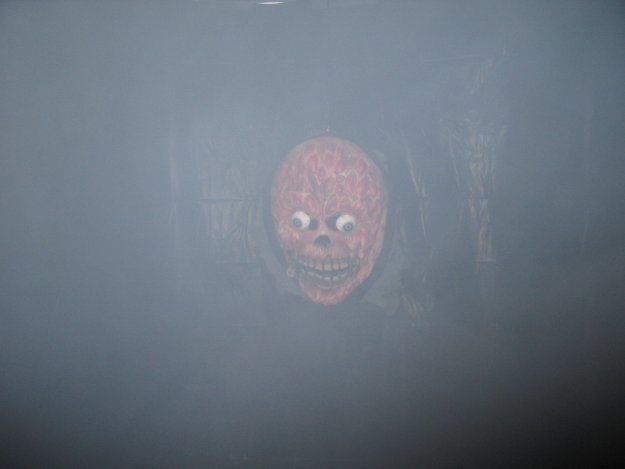 As you continue down the 25-30 foot long porch-way toward the floating head, you see a slowly moving, obviously human, thing sitting down below the head, taking the attention away from his black-cloaked brother sitting immediately to his left. 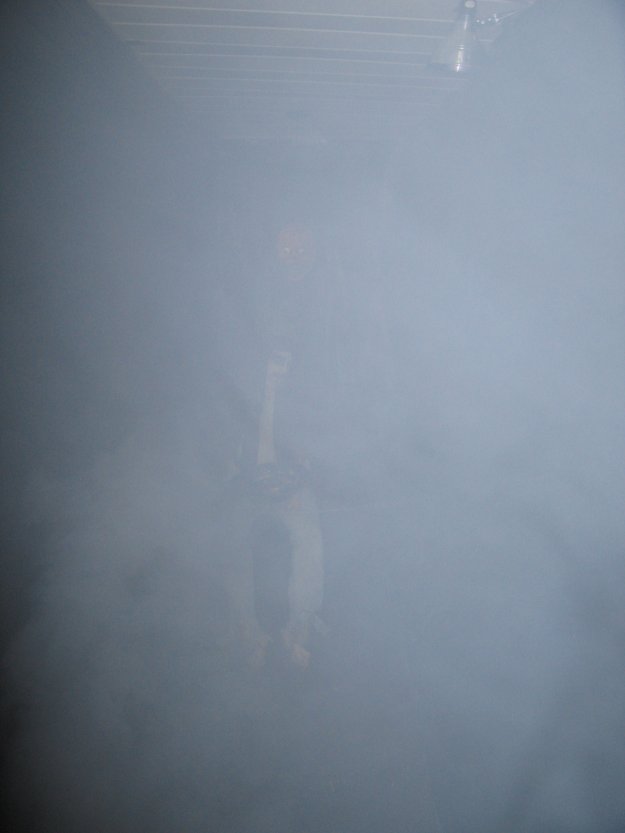 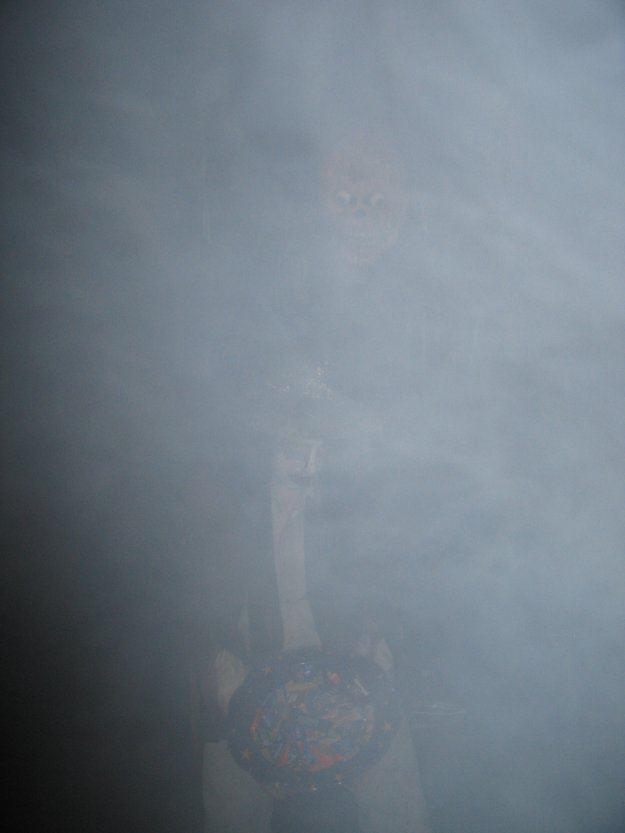 "Want some candy?", I grunt in my best low-toned raspy goblin-esque voice, while still awkwardly moving around the bench.

About this time, they reach down for some candy and at the same time, my brother swivels his body around to reveal himself to the unsuspecting teen-ager.  Depending on age and some other factors, he also usually screams and grabs the candy-grubbing arms reaching down.  This...  is why I love Halloween.

Hehe....  Then, on the way back, the intense strobe light mixed with fog makes it hard to find the entrance/exit, and upon exiting things such as "Holy cow, that was intense", or "Dude, did you see that guy in the hood?", or "Wow, that was so cool!" could be heard as me and Ryan just look at each other grinning from ear-to-ear and laughing.

The best reaction last night was from two teen-age girls who never saw Ryan coming.  I could tell they were scared when they just kind of stood there, with hands covering their mouths, midst the fog, looking at my bowl of candy kind of rolling around, jerking.

When the first one reached in, Ryan turned around and grabbed the other one while screaming.  OH Man!  The girl reaching into the bowl jumped and unwittingly tossed her candy all over the place.

Ryan and I were uncontrollably laughing at this point, and not caring at all that she was taking her revenge by grabbing handfuls of our candy and stuffing it into her little bag. 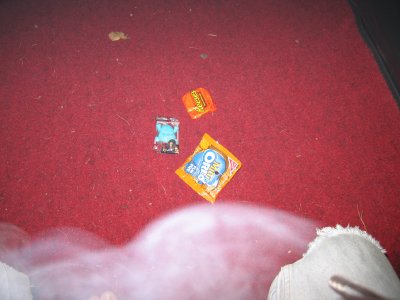 Hehe... That's what's so great about the picture to the right.  That's the proof of the story, baby.  We weren't giving away those types of candy, yet somehow, they were found on the porch floor.

I laughed about that one for about 5 minutes solid.

We had a lot of trick-or-treaters this year.  Most of them were of the age where intense scaring would have been wrong, so just the eeriness of the decor suited quite well.

Lots of parents came as well.

Something else which lets me know we did a good job was that 90% of everyone who commented something like "Ohh... A haunted house" before entering, usually voiced something to the effect of "Wow... A really good haunted house..." in a much lower tone.  "Holy cow", or "Geeze..." could be heard from under people's breath who were just entering the porch hall-way.

Anyway...  That's the story, and we've already got plans to do it better next year. 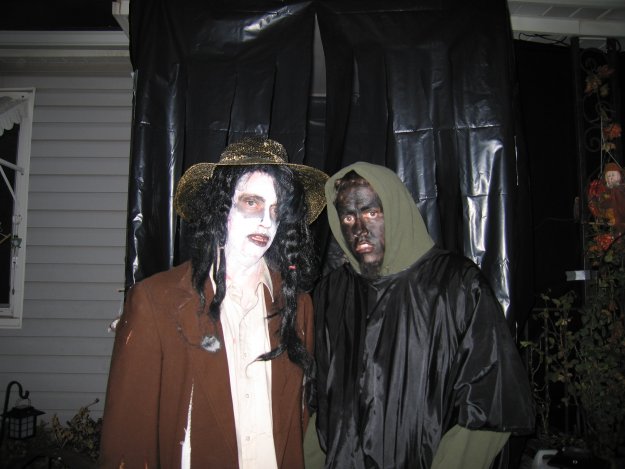 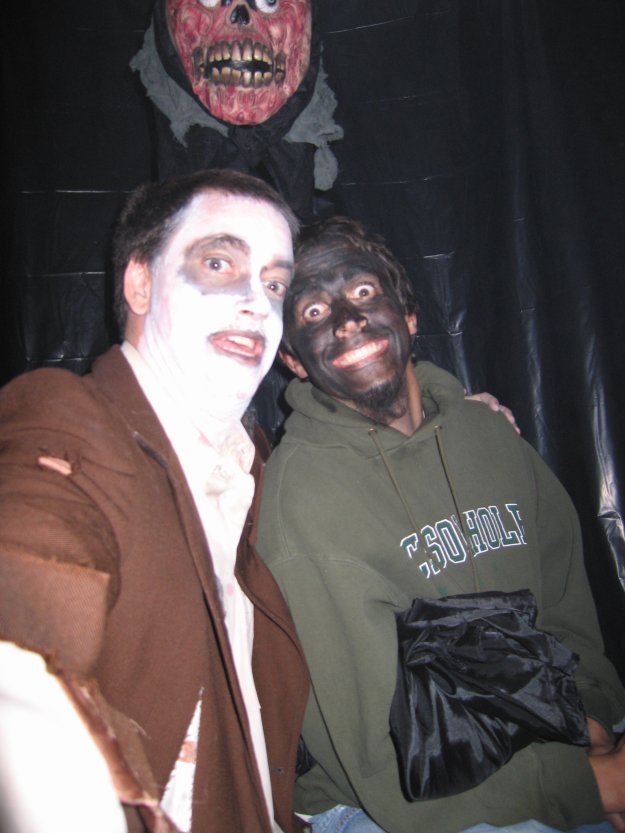 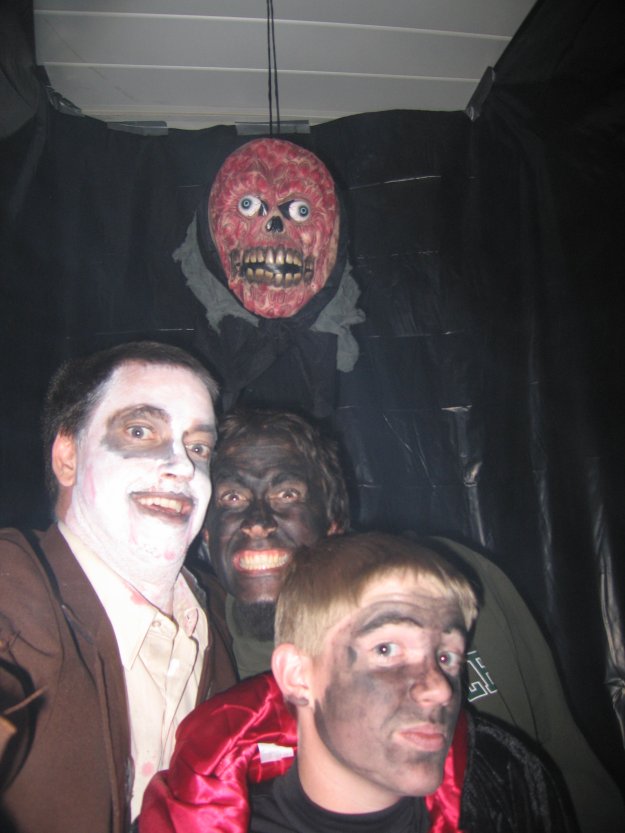 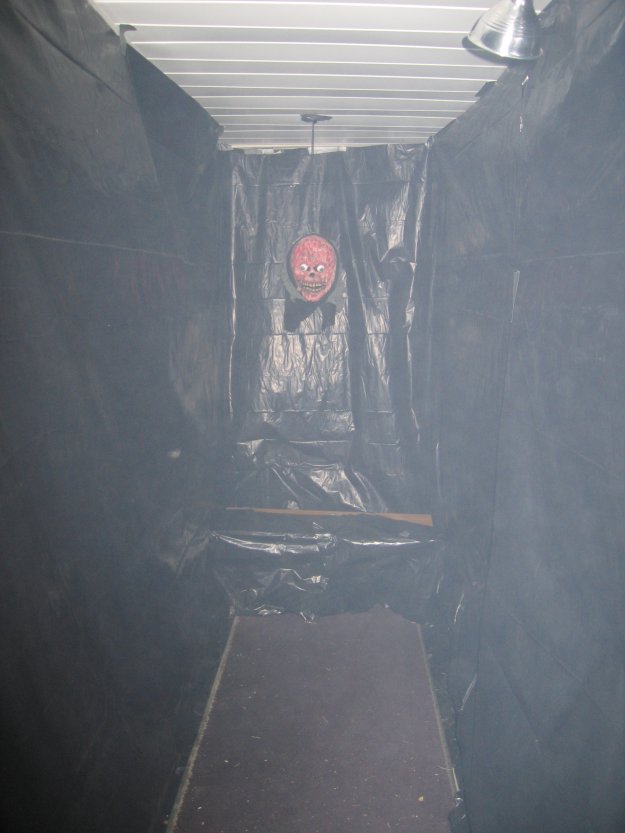 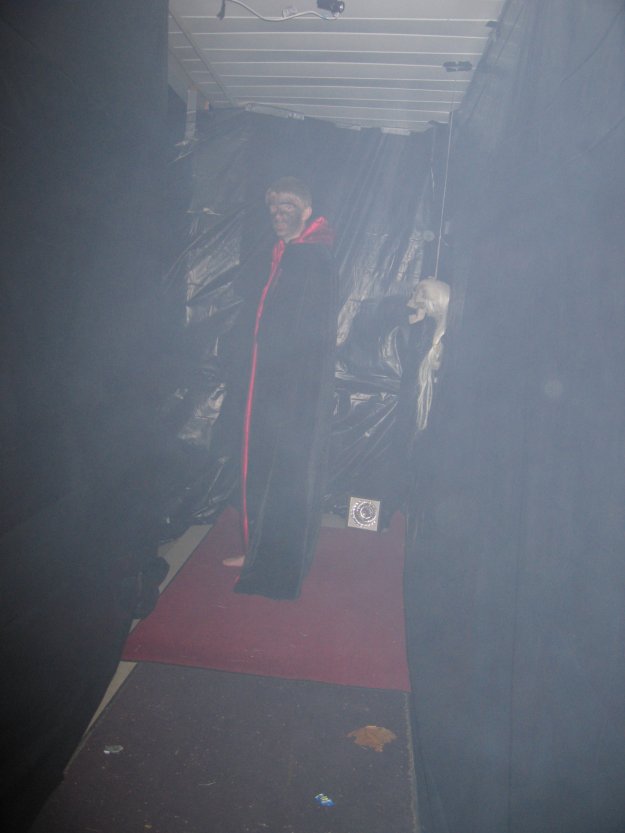