return to I Love My Journal
orson's blog
Tags
FOOD 1

Subscribe!
content
>>next>>
<<previous<<
Optical Illusion
Last night before going to bed, I (well my wife) discovered an interesting phenomenon. Some type of optical trick/illusion, I don't know what is actually causing it.

I was playing with a laser pointer with the lights out. It was completly dark and my wife asked me if I could see the blue streak seemingly coming out of the red dot. At first I didn't see it, but after looking a bit, I did.

Here is an illustration showing (with slightly more contrast) what I saw. 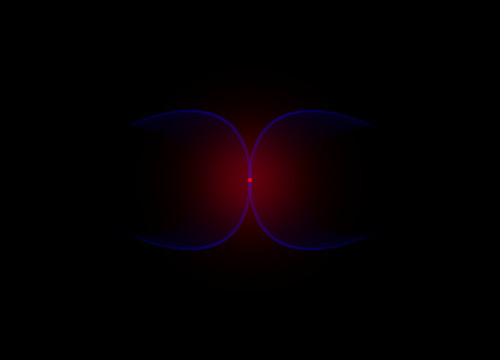 Interestingly, the left blue curve was seen only by my left eye, and my right eye could only see the right curve.

I have no idea what causes it. I would suspect it could be a mind trick (optical illusion), an optical artifact (ex.: lens flare), or some kind of retnal "color bleeding"

It would seem to curve toward my eye's blind spot, but I can move the focus of my eye away from the red spot and look directly at the blue curves.

Well, that's all I've got to say on it for now. If anyone has seen this or knows more about it, I would be interested in hearing about it.