Subscribe!
excited
>>next>>
<<previous<<
Mustang GT vs Saab 950 Turbo
Hehe....  I love it when I learn new stuff about Springville.

I had no idea that there existed a place in Springville that was absolutely perfect for racing.  Now we're talking 0-80 MPH racing in a straight line.  Nothing curvy or anything like that.  So... Anyway...

My co-worker, Steve comes into my office (or rather, the closet) with a grin on his face and asks, "Wanna race?".  I look at him somewhat inquisitively and say with no hesitation, "Sure!  Bring it on!". 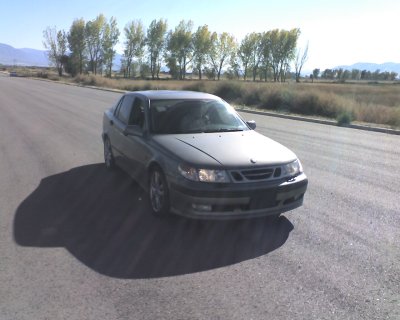 He then tells me his brother let him drive his Saab 950 Turbo and I couldn't tell if he was serious about his question.  He then told me he had a few things to do, but could go shortly thereafter.

Anyway...  Make a long story short, my boss not only encouraged us to go race, but he also came with us. hehe....  I love my job.

So, my boss tells me of the aforementioned location frequently used to land RC planes and racing and stuff, and I say "let's go!".

We arrive there and sure enough, there's a straight, smooth road a couple hundred feet long (not enough to do a quarter mile, and still have time to stop), and I just smile.

We turn around and my boss gets into my car (because he thinks I'm gonna smoke Steve, and thus gives me the extra-body handicap), and proceeds to vocalize the countdown. 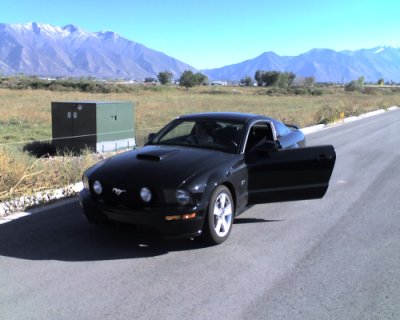 So I mash on the gas, and sure enough......  From start to finish, I blow Steve out of the water.

But that wasn't the best part - tee hee.

During the run, my boss was with me, and he likes talking about fast cars 'n' stuff, so I think he's been in a race or two.  Permit me a chuckle or two....

When I was in first, I could tell his face changed a bit, and then when I hit 2nd and spun the tires much more than just a chirp, he let out a "Holy shiz!"   (yes, he said shiz, he's a good man) and I just grinned from ear to ear.

Anyway...  We raced two more times, after smoking him the first time by at least 3 car lengths.

The 2nd run, he started a car-length a head of me, both stopped.  I smoked him.

The 3rd run, he started and I allowed a full car length before I started.  I still beat him.

To Steve's defense, again, this wasn't his car - but everything I know about racing led me to believe that Steve does indeed know how to drive well.  I'd like to race him again in a car more suited against a 2007 Mustang GT.

Gooooood times!  Made my day.
Cars