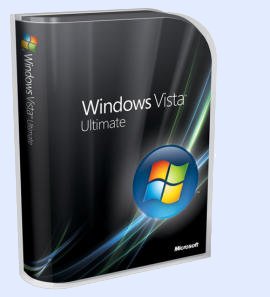 I'm referring to this "new and improved" piece of software they've recently released called Vista.  In all honesty, I hoped it would fail.  I mean, c'mon...  I'm a Linux user, and I love Linux, and using Windows makes me want to create interesting situations wherein my body experiences large amounts of pain, just to reduce the realization of the OS I'm using.  Okay, not really, but I really don't like working on Windows boxes.  It really is quite painful after having used Linux for so long.

Anyway....  I saw the title of this article this morning and came to a realization.

Microsoft had better get its act together, or it's gonna be in trouble.

Yes, yes, I know...  Coming from a person who some would call a "Linux Zealot", it's pretty hard to take a comment like that seriously, but, in all seriousness, Vista is a joke.

About 2 months after it came out, I started talking to a few friends of mine who jumped on the Vista bandwagon, and much to my surprise, they had very few kind words to say about it.  These people are mostly WIndows-based programmers who depend on their OS in order to be productive.  The most common phrases were such:

Those are most of what I heard from people who either really didn't care about the OS, or people who support Micorsoft.   If I had anything to say concerning the matter, I'd simply say "I'm against knowingly putting viruses on my computer, so no thanks, M$".

Anyway..  That was about 6 months ago I heard those comments....  and now this.

The article basically states that "Vista sucks so bad, Microsoft had better do something to compensate."

I used to think that Vista would eventually take off as the "new de-facto standard" concerning Windows OS products.  Heh...  As far as I know, when XP came out, people didn't cry out that they wanted Windows ME back on new computers they bought.  I don't know... I just don't know.

Also, if any of you are doubting the reality of this situation, Microsoft themselves have put a six-month extension on the life of Windows XP.  Now why would they do that?

Anyway...  Not that I would anyway, but now I'll definitely not be putting Vista on any of my machines for the forseeable future.