It's late, but I've just gotta tell ya'll what happened about an hour ago.

An acquaintence of mine owns a 2007 Porsche Cayman and last Sunday, we talked and he agreed to take me out driving tonight.

So, he arrives here with his beautiful car out front, with the driver's door wide open.  I say my goodbye's to the family and head out to the car.  Well...  I was headed to the passenger side, and as doing so, quickly noticed he was as well, while he was pointing to me indicating he wanted me to drive it.

"No... Are you serious!?" I said, openly flabberghasted.  He nodded and proceded to get into the passenger side with me just standing there at the side of the car... just sort of blinking.  It took me like 5 full seconds of just standing there looking at the open door before I made my move to get in.

Man, I wish I had enough time to elaborate on this, but I don't.  I've gotta get some sleep tonight.  So... Anyway...

We take off, and I immediately notice that this car has noticeably less torque than mine, and I get this wry, smug smile inside, thinking "This car isn't gonna be that great."

Boy, oh boy, was I wrong.  Holy COW I should be flogged and imprisoned for the thought alone.

We proceeded up the canyon in Spanish Fork, and went up Diamond Fork Canyon Road.  On the way up, I'm noticing something about this car which I have read about, and imagined, but never really felt - until tonight.

So, we got to the very top of the road, where the pavement ends, and he says, "Let's switch seats now."  So we switch seats.

He turns the car around, and immediately starts going at least twice as fast as I had been going.

I was constantly looking at the guages to take note of what was actually happening, just so I could believe it.  Here's the stats.

I'd have to say that going down that canyon, we were averaging about 50 MPH, including turns, and if you look at the map, you can plainly see that this road is anything but straight.  There are hairpin turns at 100-200 foot intervals.

It literally was like the car was on rails.  I've never experienced such a stark contrast of handling between my car, and a car that was made to corner.

Seriously... I've read the mustang forums and WRX-STI forums and there are fanatics on both sides.. Well, this is what I've gotta say about that:

My Mustang GT is *DEFINITELY*, DEFINITELY a "muscle car".  Before tonight, I would have debated that a little bit.  Uh-uh... Not now.  Now that I've actually driven a race car, I'll never be making the mistake of calling my car a "race car", or even a "sports car" again.  It is a "muscle car".

Wow....  It really was an amazing experience I hope to never forget....

While going 75 MPH downhill, he slammed on the breaks after passing a landmark, and I'll be dipped if that car didn't go from 75 MPH to 0 MPH in about 50 to 70 feet.  I just about dropped a load in my shorts.  Holy cow. 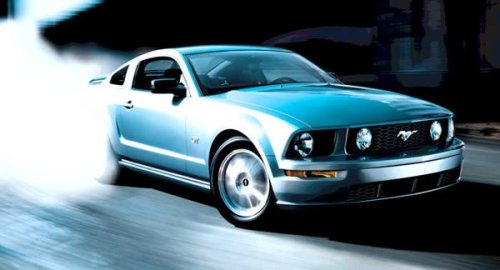 So....  Yeah...  Insane things happened tonight, and I'm glad I've seen the light of the true differences between a "sports car" and a "muscle car".

Bring it on, baby.
Cars