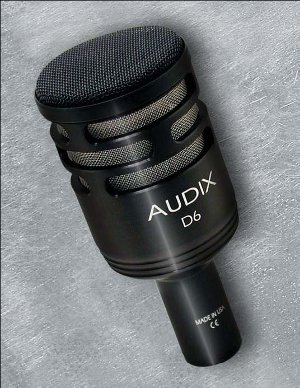 So, about a week ago, I recieved shipment of my Audix D6 Microphone, and was pretty anxious to get it working to see if all the hype I had read about was true...

You see, for the past year or so, I had been dead-set on getting a Shure Beta-52A to use on the house kick-drum here, but for the past few months have been getting more and more good feedback on this Audix!

I'm not entirely sure what pushed me over the edge, but whatever it was, I'm sure glad it worked!

Previously, I was using a cheap kick mic because I didn't have the means to buy a real one.  I've been using the Audix F-10 which came with a Fusion pack of 6 drum mics, and was pretty pleased with the price-to-performance ratio.  I had no idea what I was missing.

With the F-10, I had an EQ setting which produced pretty good results, but this required about a full month of tweaking this, pushing that, and all sorts of wizardry to get it sounding the way I wanted - and this is all with one drum-kit.  Heaven forbid I should be required to figure all that out on a different set in one recording session.  Ouch.

So, I plugged in the D6, fired up ardour, and went to town.

The results of the first test-session were really, from my perspective, a bit unbelievable.  I turned all compression, EQ, and other filters completely off the track, and still couldn't believe my ears.  The D6 was punchy, with a great sounding attack, and the low-frequencies which tended to multiply with my old mic (my kick is completely un-muffled, and is very boomy), didn't even phase the D6.

So, basically, I was getting a great slap attack from the beater, and incredible punchiness in the low-end, while maintaining all the crazy low-end frequencies which previously needed to be EQ'ed to control.

Yeah... I was sold.  No doubt, if this mic ever breaks, I'll be buying another one. 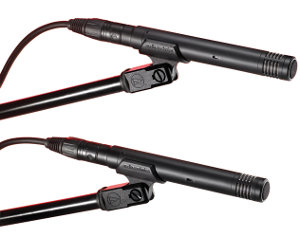 Then, about a week later, my new Audio Technicas - 4041 SP pack arrived, which comes with two stereo-matched SDC condensers, which evidently, kick some major bootie while recording full-kits as overheads.

I've been using two Audix F-15's which came with the same Audix fusion drum pack, as my overheads for years, and quite frankly, I wasn't at all ashamed by doing so.  They did their job and did it quite well - or so I thought.

When I unpacked the AT4041's, put them in a spaced pair configuration, and fired up my ol' Gretsch drum kit, I was really anxious, because these were some fairly expensive mics.  I really hoped I would like what I heard.

So, I finished playing, and placed my ears in front of the firing squad.

The verdict?  I wasn't really that impressed!  Seriously...

The mics did sound better, smoother, and way more sparkly than the F15's did, but by THAT much...  Or at least that's the way I felt upon the first hearing test.

Then, the following day, I recorded drums for a client of mine, using the AT4041's, and when I went to mix the drums in, I was a bit taken-back.

With the F15s, I usually had to pump up the EQ in the sparkle-range (about 8K-15K) by as much as 6-8 db to get the sound I liked...  WIth the AT4041's, I didn't have to EQ the drums at all.  I'm not entirely sure why I didn't hear or notice the difference in the initial test, but man, when mixing the drums into a song, the difference was night and day.  I literally sat back in my chair and stared at my mastering program, while listening - just making sure I wasn't hearing things.

...and I wasn't.  The smoothness, and sparkly brightness of these mics was making the drums fit into the mix 100% better than my previous mics.  This translates to a much better sounding drum-kit when you can't worry about perfect placement and spending hours (if not days) getting it right, and then having to EQ the mix to death to get the sound you're looking for.

The real verdict?  Holy COW!  Worth every penny paid.

I'll be using these mics for years to come....  and I haven't even recorded an acoustic guitar with them yet!

And I also have a D6, so I imagine the results would be similar!