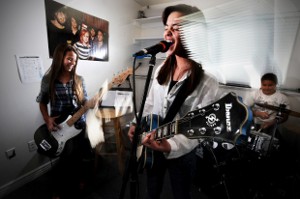 Last Friday, we had the awesome opportunity to meet a fairly incredible group of girls.  They call themselves The Blue Aces, and after having listened to them strum a few chords, I'd say they've earned their title.

Their manager contacted me after hearing a few samples from Advanced Budget Studios, and was interested in getting a pilot song done.

The Blue Aces showed up Friday, and within a couple of hours, we had tracked one of their favorites, "The Eyes of The Enemy"

Tracking went far better than anticipated, as this was the Aces' debut in a recording studio.  Cristal had the guitar tracks down in no time, as did McKenna with her awesome bass skills.  Alisa, being the youngest of the girls, was able to nail the drums far quicker than any 11-year-old drummer I've ever seen.  Then, Cristal tracked vocals, and let me tell you what!

Cristal can sing!  While most vocalists I record are worried about pitch and timing, and are a bit low on the self-confidence area, which causes them to have track multiple takes, Cristal had no such issues at all.

In fact, I wouldn't have thought she needed to re-track anything after the first take.  She did do multiple takes, only because she didn't like the "vibe" of the first one.  After her first vocal take, she said,  "I can get it down better than that", after I told her the take was perfect.  The 2nd take was indeed better, which at the time, I thought was sure to be impossible.  You go, girl!

After about 2 more hours of post-processing and nit-picking, we nailed a pretty darned good demo of The Eyes of The Enemy.

Looking forward to the next session, Aces!