Subscribe!
content
>>next>>
<<previous<<
Gphoto2 / Gnome Problem
Ya know...  Sometimes I hate open source.  Most times I love it, but sometimes I hate it.

I recently updated my gentoo gnome installation to 2.24.2, and didn't think much of it.  I then tried to connect my Nikon S210 digital camera to my usb port and perform the simple task of importing photos.  I have done this probably 100 times successfully.

This time, however, a new window popped up telling me, "Oh!  We found a camera on your system!  Do you want me to act like windows and try to do everything for you?"  Well...  Okay..  That was a bit harsh, but it was slightly annoying.

Anyway..  Here's the screenshot of what popped up.

So, thinking to myself, "Nope..  I know what I want to do with the photos, so, I clicked "Cancel".

I then tried to start up digikam, and it didn't say anything, other than it wouldn't import, or show, anything.  I tried flphoto with the same results.  So, I'm thinking, "Great...  I've gotta go through gphoto2's fabulous CLI interface to figure out what the heck is up."  Not exciting.  But then I found gtkam and that saved me a boat-load of time. 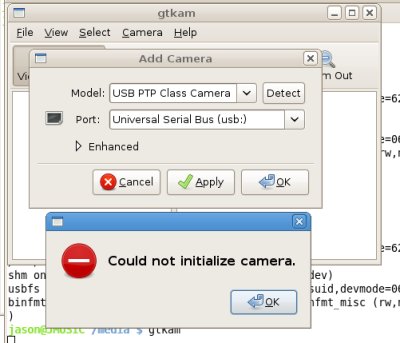 gtkam basically gave me the finger, too, but it told me a bit more than nothing.  It said "Could not initialize camera".  I could successfully detect it with no problem at all, but immediately after, it flashed the error message.

Tried as I could, I couldn't do anything about it.  I tried emerging the unstable tree, and then re-configuring the use flags.  Uhhh yeah.  Nothing.

So, I went to my other computer and downloaded them there.  No problems at all.  In fact, I was using the same version of gphoto2 on my 2nd computer as I was with the one having the problems!

Yeah... Not happy times for me.

Anyway..  To make a long story short,  I came down today and saw my camera sitting there on the floor and tried to have another go at it, because I just can't leave broken alone.

This time, I notice the "Unmount" button on one of the two boxes that pop-up.  So, I click "unmount" and then load up gtkam.

Yup...  It detected the camera and loaded up the images just fine.  ARGH! 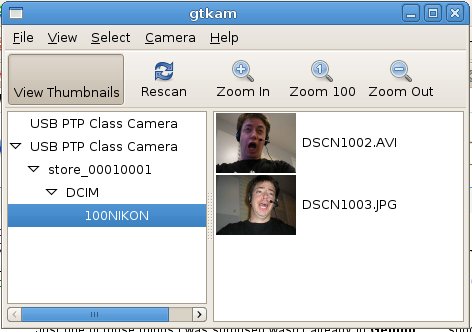 So, yeah...  Everything is good again.

I just wish little gotchas like that would be thought-through before they're pushed live.

Why render such a hugely popular program such as gphoto2 useless by auto-mounting the friggin' camera as soon as it's plugged in???

Not cool at all.

That should do the trick quite nicely. 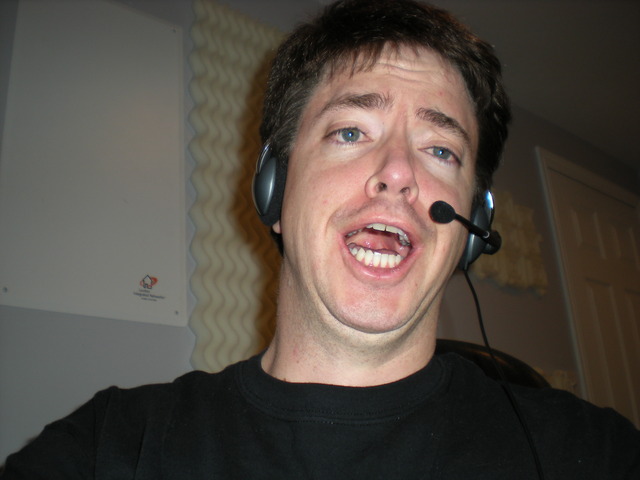 Computers / Linux
Comment by Gilles Dartiguelongue on Apr. 14, 2009 @ 12:26 am
You could have simple browsed your photos with nautilus or any gvfs aware file-browser since gtkam doesn't do much more than that. The locking problem is known and gthumb for example handles it nicely in last ~arch revisions.
Comment by PoeticIntensity on Apr. 14, 2009 @ 10:37 am
@ Gilles

Thanks for the tip, Gilles!  I didn't realize Nautilus could browse the photos.  That actually makes it a lot easier!  I was kind of thrown off, however, by the fact that Gnome said that there weren't any applications available to the camera (as is evidenced by the screenshot above).  If Nautilus can browse the photos, this whole problem could have been averted if it was shown in the list of supported apps.
Comment by Daniel on Mar. 25, 2010 @ 10:28 am
If you want to script it you can use gvfs-mount to unmount the camera, like this:

# Wait a while so the unmount completes
sleep 5
fi

...is simpler, then you don't need to figure out the mount point.

After that I could make a photo.

But a new problem was there: the option view miniatures does not work.

Its really saddening, such a promising software with such strange behaviour.

I'm an Ubuntu newbie, and do like it very much.

But I do have the impression that many developers are giving to few thoughts to the users.

Of course, there was a time that any Linux-user was a specialist, able to write his own scripts to solve problems. And also was able to operate with the CLI by defalt.