Subscribe!
okay
>>next>>
<<previous<<
Disney DRM, Ripping DVDs
Lately, I've been viewing a few Disney flicks on DVD.  I got Bolt and Bedtime Stories.  Because I usually rent them on redbox and can only have them for a day, I will rip them, and then when I get around to it, I'll watch em' then delete them.  No problems with that, as far as I can see.  I rent them to view them once, and that's what I do.

Well, lately, Disney DVDs have been tougher to rip.  The table of contents listed by dvd::rip had me confused for a bit.  Take a look at the screenshot below: 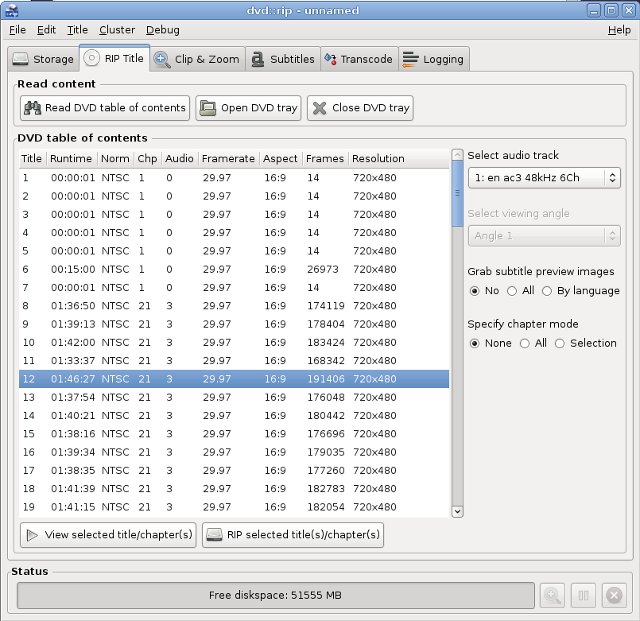 You'll notice that titles 8 through 19 (actually through 42, offscreen) all seem to be full-length movies.  So, if I try to play any of them on mplayer, mplayer fails and doesn't play anything.  VLC works just fine, if you play it from the menus, but what if I want to rip just the movie, with no menus?

Hope that doesn't confuse everyone.  I just wanted to blog about how to get it done.  So far, VLC version 8.6i is the version I use to rip Disney movies.  Everything else either can't rip it, or flat-out can't play it.

On the flip-side, it seems that Sony hasn't been putting any effort at all towards DRM on their normal DVDs.  They're probably just putting all their efforts into copy protecting Blu-Rays now, which is just fine by me.
Drm / Linux
Comment by Steve Dibb on Apr. 06, 2009 @ 11:46 am
That's cool, I didn't know you could see which track is playing in VLC.  Mplayer needs that.
Comment by Gary on May. 24, 2009 @ 09:36 am
I'll tell you what I think:  Disney can suck it.

Why do they expend resources preventing the unpreventable?  My wife rents from Redbox and we don't always have the time to watch all the videos in one night.

So what's a person to do?  Rip the videos, of course.  It took me three hours to figure out how to rip Bolt.  Unbenownst to me, I had ripped Bedtime Stories incorrectly that same night.  So I did the next best thing:  I downloaded a torrent and got a copy for "free."

So I have instructed my wife:  Do not rent Disney videos.  We get better service from The Pirate Bay.

Today I discovered a "DEAL" from them advertising to get 4 DVD's for $1, so I did my little research and started reading the fine print and Voila! Yes, you do get 4 DVD's for $1, but then you are obligated to purchase 5 DVD's at full price within the next 2 years, and if you don't do it, then they will charge your credit card for the price 3 of the DVD's that you got.

I'm disgusted with this king of tactics by this company, getting kids, parents and grandparents to be lured with this kind of misleading promotions and then ripping them off.

So Disney, you can really suck it!

Are you for real?  This has been used by every book/wine/coffee/CD-of-the-month club since time immemorial.  Four DVDs at essentially free plus five at full price still comes out to roughly 45% off each, assuming the same cost per unit.