Subscribe!
content
>>next>>
<<previous<<
The Geek In Me
Ya know...  I'm not the best coder in the world, and I'm not the geekiest of geeks, either.  I personally know quite a few people who would classify me as a "mutt coder", because I really don't care too much about code purity.

I'm not quite sure what in me makes me that way, but it's true.  Maybe it's because I learned programming backwards.  Where most people learn the hard stuff first, such as assembler and C and COBOL, I learned HTML first.  I learned everything there was to learn about front-end web development, including image manipulation, HTML, CSS, DHTML, JavaScript, ActionScript, etc...

It was only when I realized that being a front-end developer was a dead-end street, especially for someone who couldn't design worth a hoot, that I looked into server-side scripting.  It was then that I found PHP and the power of relational databases such as MySQL and PostgreSQL.

Through my career as a web application developer, I've created my fair share of applications, web sites, pages, snippets, and have quite the arsenal of code in my toolbelt, yet I don't find myself too terribly concerned with the purity of my code.  I really do "leave well enough alone".

Now, before you all toss me away as some ego-driven script kiddie who can do nothing but copy and paste, I must say that yes, I like need my code to be maintainable, and I can't stand coding won't code now without using a MVC framework of some sort.  But honestly, for me to go through my code every few months and make sure it's pure, and as golden as the sun...   ... sorry, that just doesn't happen.

I think that because of this, my programming skills might not be up where they otherwise could be, but I sacrifice this for one thing that I believe has given me the ability to rise up as a programmer as fast as I have.  That thing is what gives me the most pride in my work.   When asked what the most satisfying part of my job is, I simply answer, "making people happy".

My whole development career has been working as an internal team, creating applications for my fellow employees.  Luckily, I've been blessed to work for appreciative and understanding folks, and in return, making them happy is what keeps me going.

A few days ago, my boss came to me and asked me to build a ticket-tracking program.

I know there are loads of programs out there that do an excellent job of doing just that, and after relaying that to my boss, he told me he has tried 5 separate times  to implement canned ticket trackers for the company.

All 5 times it failed miserably.  They were too hard to use, too confusing, too technical, or some other problem keeping the company from using it.  It's hard to compete with walking up to the IT team, or placing a quick phone call.

Anyway...  I spent 3 days on a system and we implemented it yesterday.  Focusing on absolute ease-of-use, I believe I was able to create a system people will actually use.

My boss came to me this afternoon and told me that more people are using this one than any of the other 5 previous canned systems.  I guess that's a good thing.

The tracker consists of 3 screens, and gives the users no more options than they absolutely need.  It also doesn't require any passwords, and uses persistent cookies to remember who is logged in.

So....  Not entirely sure why I'm writing this, other than I feel like it, but...  Thanks for reading.

I guess I just really like it when my boss comes in to my office, sits down, and says, "Ya know, you're making my job a heckuva lot easier.  Thanks."

Here are some screenshots of the ticket tracker I built: 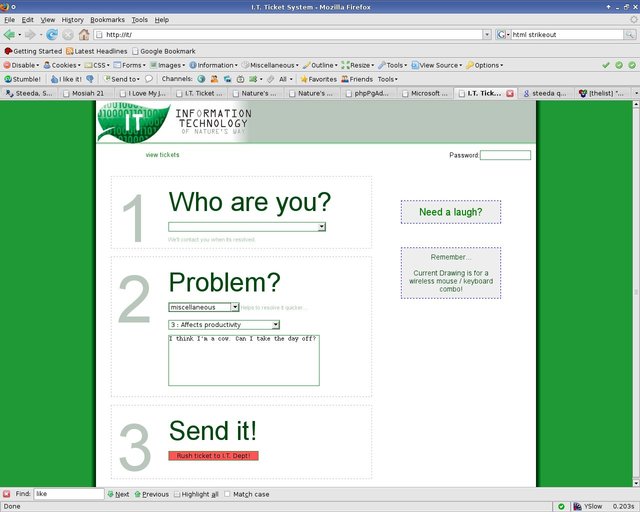 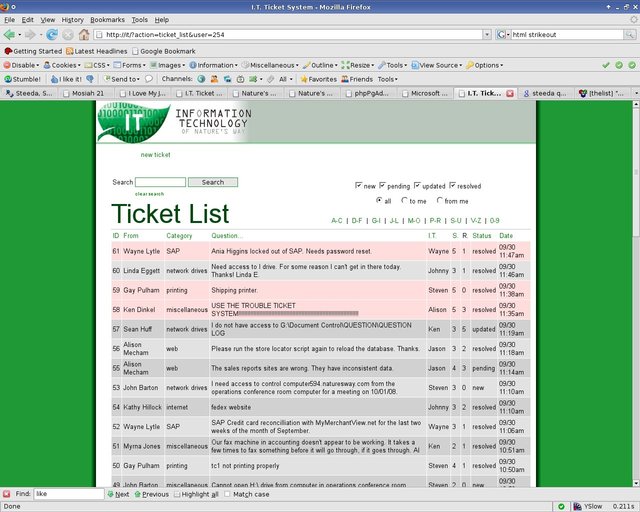 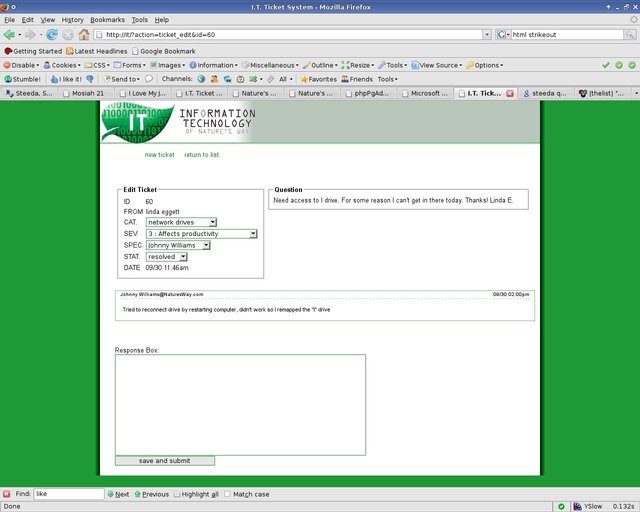 My question is why you coudln't have just played with a front end to, say Trac?
Comment by PoeticIntensity on Oct. 02, 2008 @ 11:01 pm
To answer your question, iaindb, I know that Trac requires svn, and the server which the ticket system is on doesn't require it.  My train of thought, mostly, is that the amount of bloat a program inserts into a project is indirectly related to the projects flexibility and scalability.

This project took me about 3 days to build.  The extra time it took to do it slim will be more than made up later on by how fast I can add on features, which otherwise wouldn't be cost effective.

Anyway...  Thanks for stopping by.