Subscribe!
grateful
>>next>>
<<previous<<
Happy 5th Anniversary, Jason
When will I ever learn to trust my wife, my brother, and my instinct?  Probably never.

You see, Ryan, my brother, noted how bald the tires are on my Mustang GT about a month ago.  My wife also noted the same thing, as well as a pretty big storm coming this weekend.  Anyway...  I'll get on with the story.

Sarah and I celebrated our 5th Wedding Anniversary this weekend, arriving home yesterday evening, and what a celebration it was!

Friday during the day, I did my work, and thought about what car we should drive to Park City that evening.  As the forecast was pretty heavy snow, any sane individual would have chosen the front-wheel drive (with relatively new tires) as their first choice, but me - being pretty much insane, and not realizing how much difference bald tires can make in snow, - obviously didn't.

Instead, I chose the rear-wheel-drive with bald tires sports car.  Yup...  I'm smart.

After dropping off our kids at Chloe's house with good weather all the way, we drove up, having had a wonderful drive all the way up to Park City. 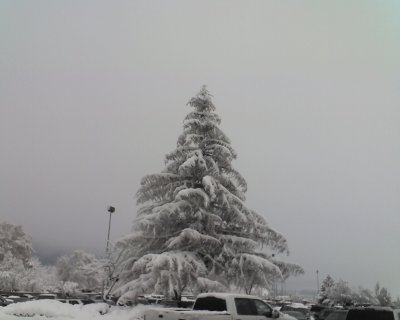 That's when it began to snow.

About a mile from our destination, I could feel the car's traction control kicking in regularly, and the back-end of the car becoming quite wiggly.  About 300 feet  from the hotel, the car simply would not continue.  We were diagonally "parked" in the middle of the road, trying desperately to at least get into the ski-lodge parking lot about 10 feet from the car.  I was a bit worried.

While she was driving, and I was pushing, and as a whole, was getting nowhere fast, I noticed the tires weren't spinning at all, due to the traction control.  I then got an idea.

I thanked Sarah for her efforts and then got back in to the pilot's seat and switched the TCS off.  The tires then lit up and the car, although not in a straight line by any means, went forward.  We decided to park the car in the ski-lodge parking lot and walk to our hotel.

The hotel was nice.  It was a studio hotel, quite small, but by the same token, it was comfy.

We kind of just sat there trying to figure out what to do.  We had plans to eat and watch a movie that night, but without a car, we weren't doing anything.

We couldn't just leave the car in the lot, either, as it would be towed after 2:00AM.  So...  I decided to go and give the car my best shot.

As the drive was uphill the entire way, I really didn't expect to get very far.  I just knew something needed to be done.

So, I jogged down to the car, got in, said a prayer, and started it up.  I turned the TCS off and headed up!

Most of the way my car was headed diagonally, but due to my extensive insanely-crazy driving in snow as an adolescent, my instincts were spot-on as to how to make sure the car went, albeit not straight, eventually to my destination.

During the 10 minute, 300 foot drive, I saw many cars spinning their tires, including a Ford Explorer, so I didn't feel so bad.  On the flip-side, most of those cars were going straight.  Mine definitely was not going straight.

So... After honing my snow-driving skills to a point previously thought unattainable, I managed to inch it up the icy driveway of the Mountainside Marriott Hotel and into the garage.

On my way up to the room, I couldn't help but call Sarah and give her the impression of my impending doom.  I did it quite well, might I say, as well.  This was certified by the screech of "Hooonnneeey!!!!" as I entered the room 10 seconds after I told her I couldn't talk due to the situation I was in on the road.  *evil grin*

Anyway... That was great.

We then decided, after waiting for a bus for about 30 minutes and noticing that the roads weren't so bad after the shoveling and salting was done by the snowplows, that we would tackle the roads in my Mustang GT once again.

So, we did, and it worked out wonderfully.  The roads went from hazardously icy to a piece of cake in a couple of hours.

We went and ate an overly-expensive, yet totally tasty sub from Quiznos, followed by an ice-cream from Cold Stone.

We then went and saw a movie I don't think I'll ever forget.  It was simply amazing.

The movie is called "August Rush", directed by Kirsten Sheridan.

It is simply all about the power of music, wrapped up in a great love story.  Both Sarah and I were struggling to hold in tears practically the whole movie.  The twist is, these tears weren't sad ones, they were definitely happy tears.

Yup... It was a movie about the power of believing in yourself, believing in things unseen, the power of music, and love..... and family.  It is also totally PG.  Nothing I wouldn't mind my mother watching at all.  In fact, Mom - if you're reading this, stop and go watch that movie right away.  You'll be glad you did.

The music in the movie was phenomenal as well.  Very well done.

After the movie, we went back to the hotel (driving was much easier this time), and had a simply beautiful night together. 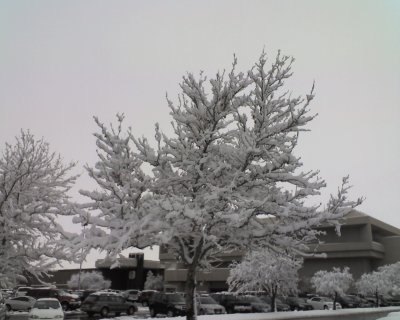 The next morning, we woke up at 10:00am, got ready to check-out, and then went to a nice "shared ownership" sales presentation by a staffer of the Marriott enterprise.  After an hour and a half of a very informative, and low-pressure sales presentation, we got a gift certificate to a restaurant there in Park City called The Baja Cantina, which provided an absolutely splendid meal.  We both got a the seafood burrito, with lobster sauce.  It was really good!

After that, we headed back down, bought some gifts for the Mooso's for helping us with the kids, went to their house, gave the gifts, grabbed the kids, drove home, and that was that!

Also, congrats on the low pressure sales presentation. I got tricked into an hour and a half high pressure one once. That's a guaranteed way to make a bad name for a company. (Trend *%*#$! West) I guess Marriott has more class than to do that.