Subscribe!
exhausted
>>next>>
<<previous<<
We Finally Cut It Down!
Wow... I can't believe I'm still awake.  For future reference, the day after Thanksgiving is a day of pain.  It is a day of fear and dread.  But today was better.

When I got married to my wonderful wife, she told me she would marry me on one condition.  Okay, okay... That's a lie.  But if I wrote down all the conditions upon which she would marry me, I think I'd die before I got em' all in here.  Suffice it to say, she did marry me...  and there's NO turning back!  hehe...

Anyway...  My wife has always wanted a real Christmas tree.  Two years ago, we got what I thought was a real Christmas tree, but evidently, even though it was previously alive, and we bought it from a guy who wanted way too much money for it, it wasn't real enough.  Nope.... No-siree.

This year, we had the pleasure of actually going to a somewhat-far-away place and cutting down our own Christmas tree from the mountains of Ephraim, Utah; after rising at the sinister hour of 5:00 AM (yes, that's AM - morning time), freezing ourselves silly for 2.5 hours while standing in a line waiting for an authority figure to tell us we could cut a tree down, and then actually having the privilege of actually finding a suitable tree!

I say this in a style which would attest to my distain for the whole lot, but actually....

I really liked it!

After finding the place where the tickets were to be sold (at the mouth of the canyon, in sub-zero temperatures), we parked the car along the side of the street and walked to the line of people with similar intentions which had formed 2 hours previously. 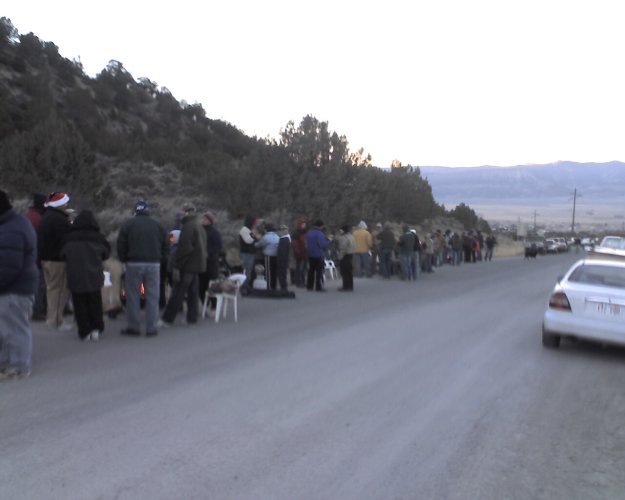 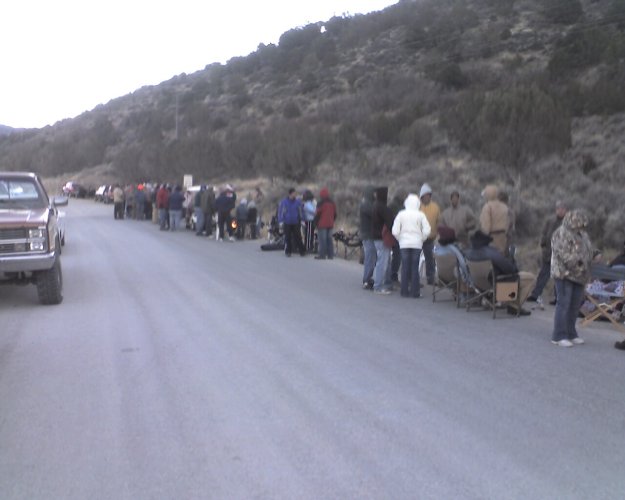 While waiting in line, I met a guy named Paul from New Zealand who also had frostbitten toes by the ticket-selling time of 9:00am, as well as a fine gentleman named Dean Cox who had been freezing his you-know-what's off every year for the past 5 years!  We had a grand old time.

After we got our ticket, we decided to go have some Ephraim-homestyle breakfast food at a place called "The Satisifed Ewe", where exactly one waitress and one cook were busily employed making delicious food to fill their customers' bellies.

About an hour later, we were back up the canyon searching for our perfect tree.  After about 30 minutes of searching, Sarah gave me the thumb's-up for a tree which she thought might just do the trick.  So, I cut it down with our trusty brand-new recently-purchased-the-night-before bow-saw and down the tree came.  Almost right on top of Sarah.  We both had a great laugh over that one.

We then tied it to the top of our Chrysler Town-and-Country minivan, and were on our way!

It actually was a splendid day, even though I am now more tired than I have been in a very, very long time.

The tree is now decorated (oh, did I say "tree"?  I meant trees. Yup, we now have 3 Christmas trees adorning our home, and that's if you don't include the 3 other trees we have on our kitchen wall...indention....thingy....)  All and all...  Christmas is ON at the Jones residence!  Bring it, Santa!

And yes,  Jason also got the lights hung on the house yesterday as well.

Somebody go check on my Mom.  I think she just had a heart attack.

Here are some pictures of the whole ordeal with captions below: 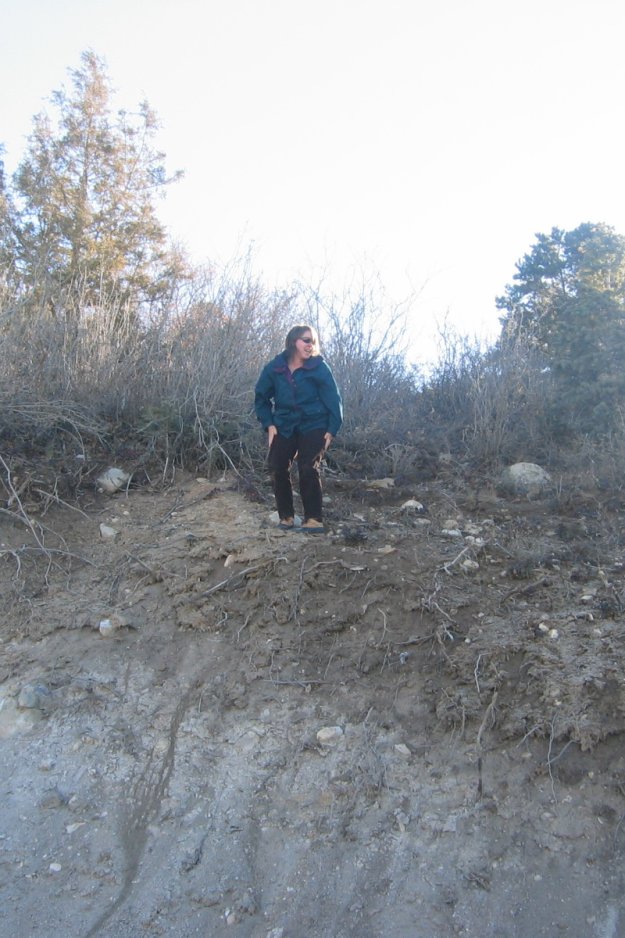 This is Sarah after climbing an incline which didn't allow for an easy descent after-the-fact.  I thoroughly enjoyed it. 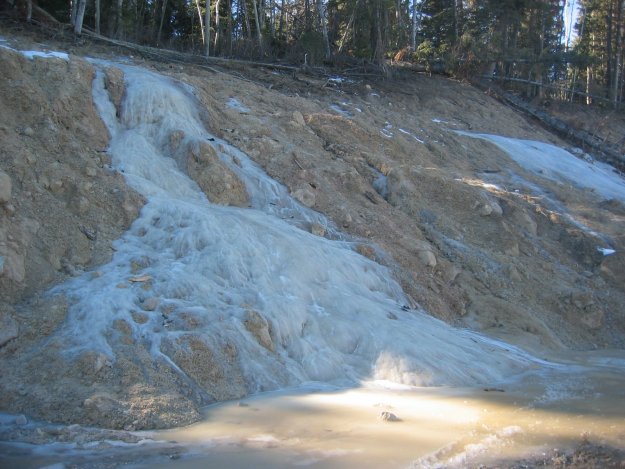 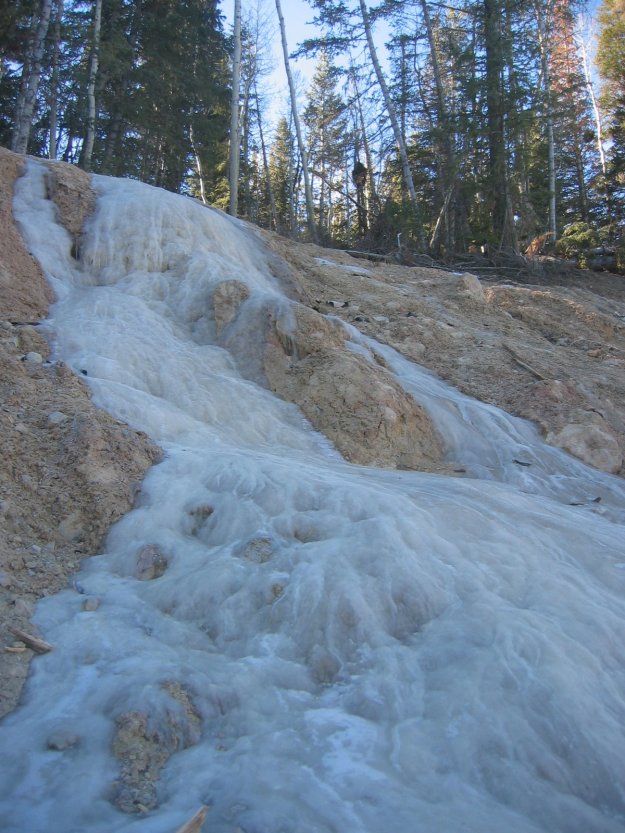 What you see in the above two photos is ice.  Yup... ice...  flowing down the mountainside somehow...  It was really rather amazing.... and slippery.

The following photos are the victory series.  I saw, I cut, I rose victorious. 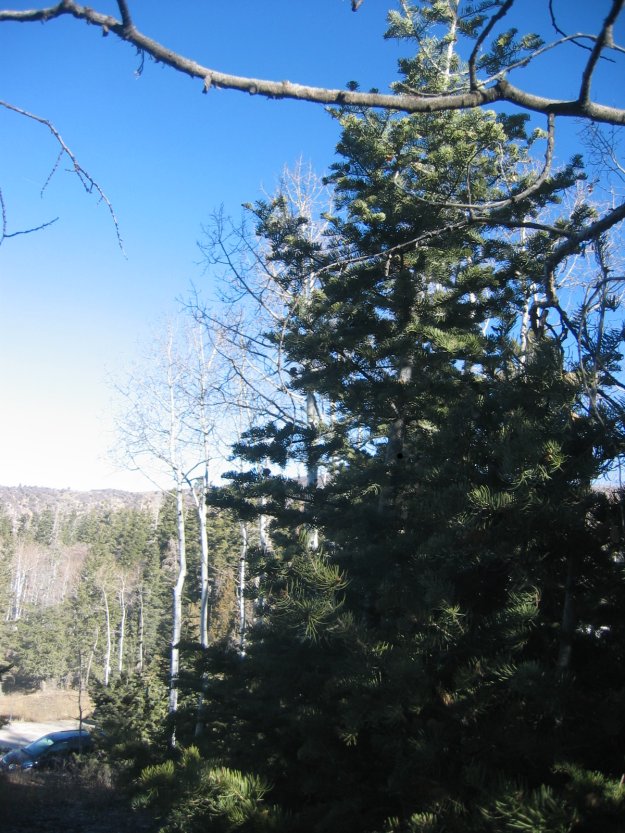 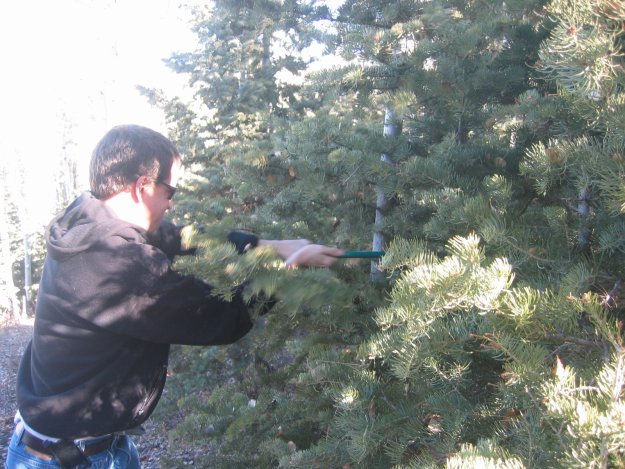 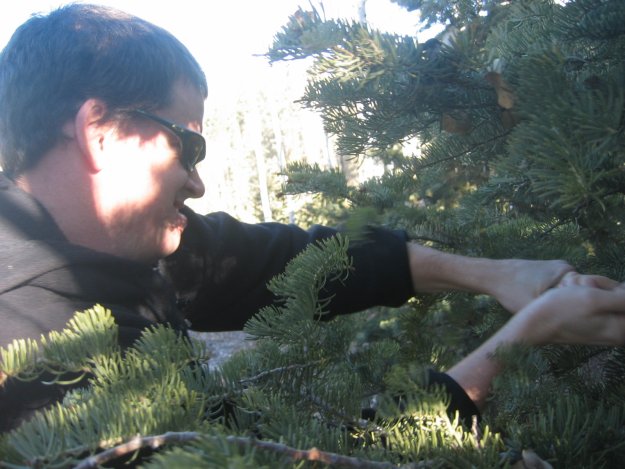 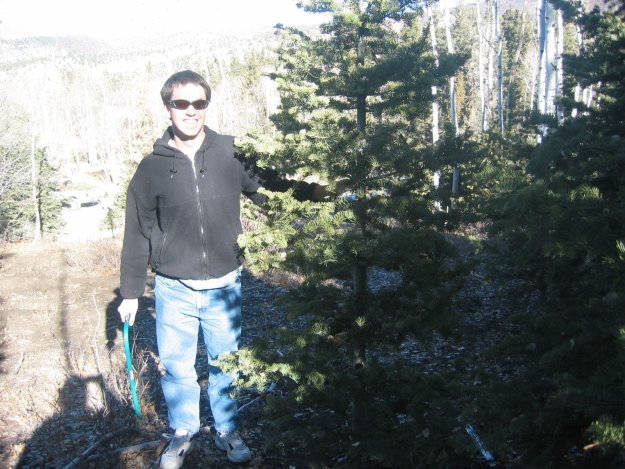 And we definitely saved the best for last.  The obligatory "family photo". 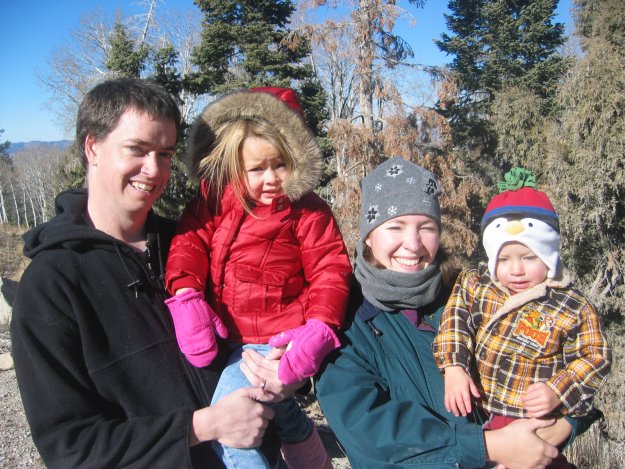 Thanks for readin'!
Personal
Comment by Mom on Nov. 25, 2007 @ 12:50 pm
Jason, I swear you need to write a book with your description ability!!  I loved this entry....it was like I was there with you!  I hope the kids didn't freeze to death or were they asleep in the car the whole time?  Anyway thanks for sharing & I can't wait to see the notrious tree in person!  love to ya all!
Comment by anonymous on Dec. 04, 2007 @ 11:41 pm
Honey I absolutely loved it!  You should write a book.  Your mom is so right.  We did have fun, huh?  Thanks for making it memorable.