Subscribe!
content
>>next>>
<<previous<<
Server Down! (Temporarily)
Wow....   This will probably be a short entry, but I thought I'd write down what is the first hardware failure of my server!

I built this server 3 years ago, and it has been serving up everything that is served in my house (mythtv, web (this site), ftp, ssh, music, photos).  Well...

Yesterday evening, we tried to fire up mythtv, and the screen wouldn't work.  I was way too tired to try troubleshooting last night, so this afternoon, I found out it was my video card!

The symptom of the crash was simply a non-responsive machine, from pings to ssh, to http.  When I tried to view it on the projector, the projector acted like there was nothing hooked up to it.  So, I rebooted it (since I couldn't access it at all otherwise).

When I booted it, strangeness happened.  Nothing came up on the projector, and the hard drives never started spinning - also there was a complete lack of the usual "beep" from the POSTing of the computer.  I knew something was up.

I totally lucked out with what happened next.  heh...  I took out the video card and booted it.  I got a beep, and nothing else happened.  Due to the beep, I knew something was up.

I replaced the video card with a very low-quality one I had lying around, and the thing booted up like it was brand-new.

So.... Looks like it's off to the computer shop tomorrow to see if I can find an AGP DVI-enabled video card for a reasonable price.

Anyway...  The first pic below is, of course, the server.  The 2nd one is the AGP NVIDIA FX-5500 card which is now defunct (took the picture after I blew the thing off with compressed air.  The fan was so caked with dust, it looked like mud.  I should have taken a pic before cleaning... Ohwell..)

I'm glad it was the video card.  Could have been much worse. 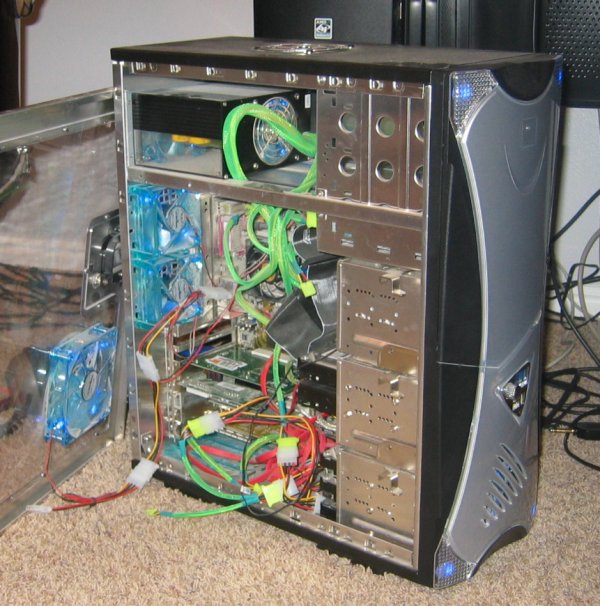 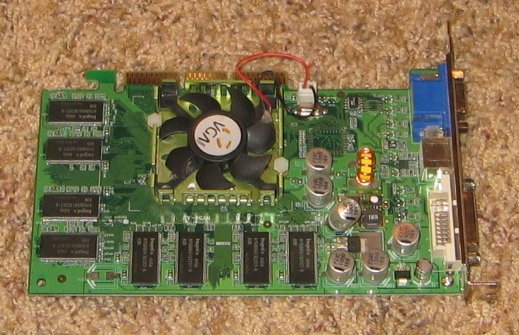